Most Reverend Robert N. Lynch | His Coat of Arms 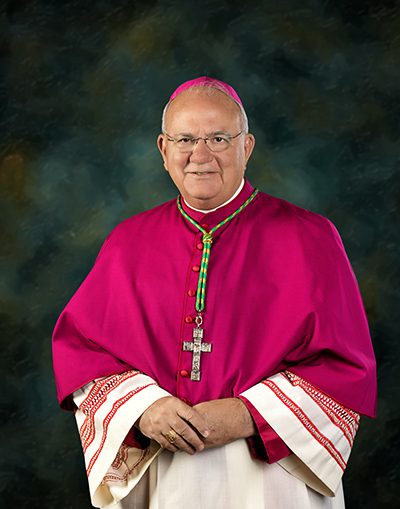 Bishop Emeritus Robert Lynch was born in Charleston, West Virginia in 1941. He received his bachelor of arts degree from the Pontifical College Josephinum in Worthington, Ohio in May 1963 and his master of divinity degree from Pope John XXIII National Seminary in Weston, Massachusetts in May, 1978. That same month, he was ordained a priest for the Archdiocese of Miami.

Bishop Lynch is known for his time spent as the General Secretary of the United States Catholic Conference (USCC) and the National Conference of Catholic Bishops (NCCB). His most recent assignment before coming to St. Petersburg was in Fort Lauderdale as the pastor of St. Mark Catholic Church. Previous assignments include associate pastor of St. James in North Miami,
and rector and president of St. John Vianney College Seminary in Miami. He was ordained a bishop and installed as the fourth Bishop of the Diocese of St. Petersburg on January 26, 1996.

Bishop Lynch continued the reorganization and management of the diocese begun under Archbishop Favalora. Bishop Lynch commissioned the building of a new Pastoral Center, and on March 31, 2000, the newly erected Bishop W. Thomas Larkin Pastoral Center was formally dedicated. The purpose of this new edifice was rededication to service in one space, one place,” and it brought together under one roof ministries from several locations throughout the diocese. Like Bishop Favalora, Bishop Lynch made Catholic education, in the Catholic schools as well as in the religious education programs of the parishes, a top priority in the diocese. He also took an active role in planning for the future construction of new Catholic high schools, and improvements to the existing schools.

From the beginning of his episcopacy, Bishop Lynch expressed the belief that a bishop’s responsibilities are primarily to the diocese where he serves. This belief was soon made visible in the way he made himself present to the priests, deacons, religious, and faithful of the Diocese of St. Petersburg. He recognized the talents and abilities of priests, religious, and laity alike. That recognition crossed the boundaries of gender, age, and ethnicity. It was apparent in the appointments he made to positions within the diocesan structure.

In the summer of 1998, as preparation for the Jubilee Year 2000, Bishop Lynch began the program, Renew 2000, in the diocese. At the heart of this program is the development of small Christian faith-sharing communities. This program, as well as other programs of spiritual renewal already present in the diocese, was intended to create an active and informed Catholic laity in the diocese. In addition, in the Fall of 1998, Bishop Lynch lent his earnest support to the Lay Pastoral Ministry Institute, a program of training for the laity which included studies and formation in the areas of theology, spirituality, and pastoral ministry.

In further preparation for the great Jubilee Year, Bishop Lynch focused on the Jubilee concepts of forgiveness, freedom, and release from burden. To do this, he presided at communal celebrations for the sacrament of penance throughout the diocese. He also instituted a “debt-forgiveness” program by which he released parishes in need from the burden of millions of dollars of construction debt, its payment and its longevity.

In establishing the first Capital Campaign of the diocese, Bishop Lynch once again focused on his responsibilities to the people of that diocese. He put in effect a plan to increase the priests’ retirement fund; started plans for the building of a Family Life/Spirituality Center for the spiritual growth of the people; established an endowment fund for Catholic Charities with special emphasis on support for senior citizens; and established two endowment funds for youth ministry: one for the youth ministers themselves, and the other for leadership development and scholarships for the youth under their care.

Bishop Lynch retired on November 28, 2016, after Pope Francis named Bishop Gregory Parkes of the Diocese of Pensacola-Tallahassee as his successor.