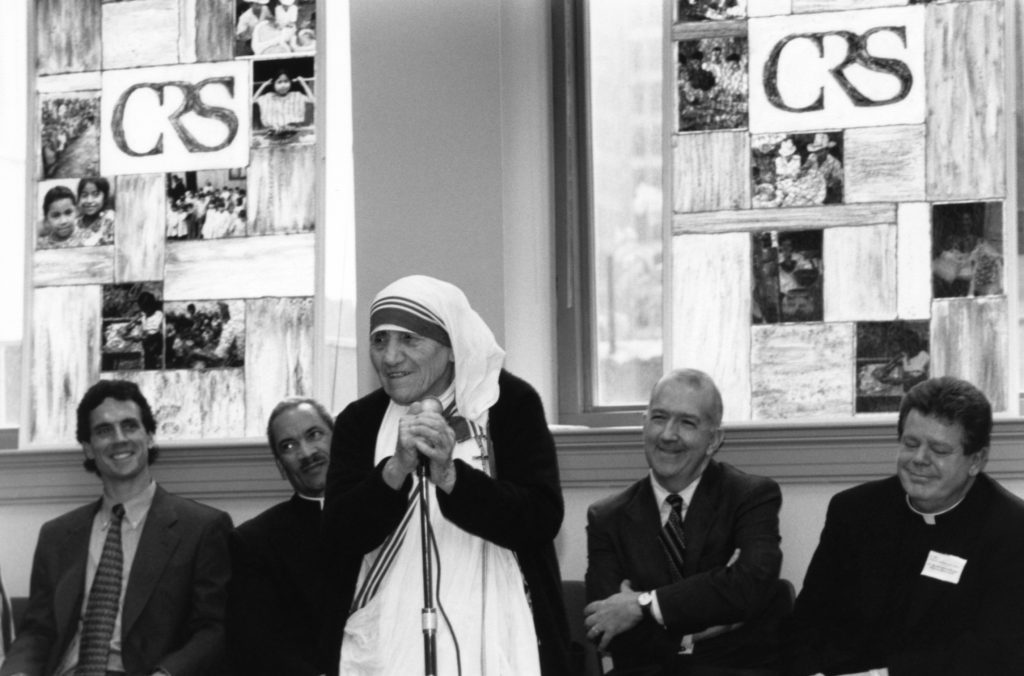 Established 75 years ago as a result of the refugee crisis that unfolded during WWII, Catholic Relief Services,  the international relief and development agency of the United States Catholic Church, has since grown into one of the largest humanitarian aid agencies in the world while responding to some of the most devastating modern crises of our time.

“From its beginning, Catholics in the United States saw this agency as an expression of the compassion of Jesus Christ, carrying out the mission he gave us in the Gospels,” says Bishop Gregory J. Mansour, Bishop of the Eparchy of Saint Maron of Brooklyn and chairman of CRS’ Board. “Even as the work has expanded and grown more complex, that gospel mission has always remained the foundation of everything that CRS does.”

To mark its 75th anniversary, CRS is holding events in dioceses across the country, culminating with an event in November at its global headquarters in Baltimore, Maryland. While the organization has grown to work in more than 110 countries and employs more than 7,000 people worldwide, its mission remains unchanged—to act in solidarity with the world’s most vulnerable people while leading the Catholic faithful in the United States in doing the same.

“This is a time when we celebrate all that we have accomplished over the past 75 years, and double down on our commitment to provide lifesaving and life-transforming assistance to some of the most disadvantaged people around the world,” says Sean Callahan, CRS president and CEO, who became the agency’s eighth president last year.

LOOKING BACK ON 75 YEARS OF HISTORY

The organization began as War Relief Services after an outpouring of concern from Catholics in the United States led U.S. bishops to help thousands of World War II survivors and refugees. From the very beginning, CRS’ operating principal was to assist people based on need, regardless of race, creed or nationality, and in partnership with local organizations, particularly Catholic Church agencies.

CRS’ first project helped shepherd some 1,500 Polish refugees into Colonia Santa Rosa, Mexico, where the agency set up a safe haven for education, training and rehabilitation.

“It’s hard to express gratitude for everything you guys do for all the refugees throughout the world,” says Julek Plowy, a Polish refugee who was helped by CRS as a child at Santa Rosa.

As Europe regained its balance after World War II, CRS expanded its operations and opened offices in Africa, Asia, the Middle East and Latin America in order to serve those who could benefit most from the assistance of Catholics in the United States. Over the last 75 years, CRS has responded to numerous emergencies, from the Ethiopia famine of the 1980s, to the global HIV epidemic of the 1990s and 2000s, to the myriad natural disasters that can strike anywhere in the world at any time.

“CRS got its start by helping refugees, but what’s amazing is that we’re still working with refugee populations all over the world,” Callahan says. “What’s changed is that unfortunately, for so many refugees today, the period of displacement is much more protracted than it might have been in the past. Therefore, our assistance to these populations has changed to reflect that new reality.”

In addition to helping the poor and vulnerable overseas, during its 75-year history CRS has also created impactful programming that engages U.S. Catholics in living out the Church’s mission to serve the world’s poor. For instance, in 1977, the United States Conference of  Catholic Bishops adopted Operation Rice Bowl as CRS’ official Lenten program. Since then, CRS Rice Bowl has become a Lenten tradition in thousands of parishes and schools across the United States, providing a tangible way for families to pray, fast, give and learn about our poorest brothers and sisters around the world.

LOOKING TOWARD THE FUTURE

Today, CRS implements programming in emergency response and recovery; agriculture; health; and education. Since it was founded, the agency has helped more than 130 million people worldwide.

“We’re trying to create a more just and prosperous world for all,” Callahan says of the agency’s ongoing mission. “And we also continue to seek ways to foster within the U.S. Catholic community a sense of global solidarity, providing inspiration to live out the spiritual tradition of compassionate service to the world.”

He notes that CRS wouldn’t be able to do any of its work without its vital supporters in the U.S. Catholic Church.

“Our U.S. Catholic community brings CRS to life. They’re such a vital part of our past, present and future, and we couldn’t do it without them,” Callahan adds.