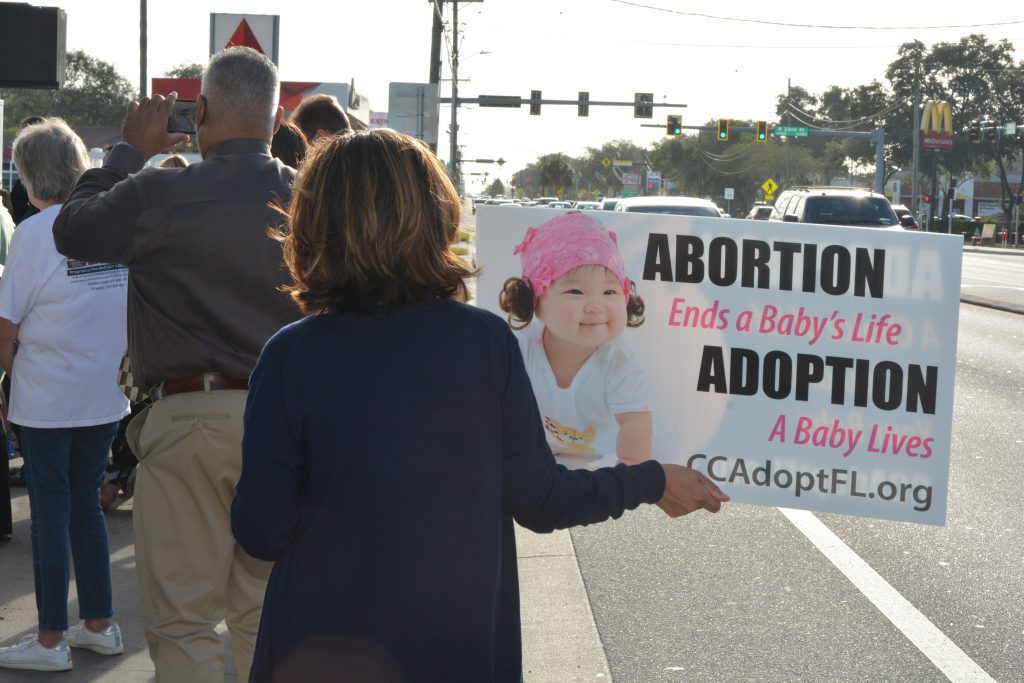 A small crowd recently gathered for the kickoff to 40 Days for Life at the Knights Women’s Center, a pro-life crisis pregnancy center on Fletcher Avenue in Tampa.  The September 24th event brought together those committed to advocating for life and praying for unborn children whose lives are tragically ended by legal abortion that takes place just steps away at a university area abortion clinic.   (Photo album here)

Founded in 2004 by Shawn Carney, 40 Days for Life is a campaign that focuses on 40 days of prayer and fasting for an end to abortion, peaceful vigils at abortion facilities, and grassroots educational outreach. Since 40 Days for Life began, over 17,000 mothers have chosen life for their children; more than 200 abortion workers have quit their jobs; and over 100 abortion centers where 40 Days for Life vigils have been held have gone out of business.

The Life, Justice and Advocacy Office of the Diocese of St. Petersburg along with Catholic Charities Foundations of Life sponsored the event.  Speakers included Shawn Carney, Carmen Claypoole, Pregnancy Center Manager at the Knights Women’s Center, Sabrina Burton Schultz, the Director of Life, Justice, and Advocacy for the Diocese of St. Petersburg, and diocesan clergy.

The Knights of Columbus, long-time supporters of this cause were represented by the Knights on Bikes, a motorcycle group that brings attention to this important issue.

“Abortion is one of main sins that cry out to heaven for vengeance,” says John, one of the Knights.  “And we all need to come together if we are going to support God and support innocent life. The Knights are strong backers of that.”

Last year, a young mother approached the Knights praying the rosary in front of the abortion clinic.  John says, “She thanked us for what we were doing because the reason the child was there was that someone talked her out of aborting her child.  So that speaks volumes right there.”

Another attendee, Jodi Burch, believes this is a vital ministry. “We want to lovingly offer an opportunity to women to know that there is hope, there is support, there are free services and there’s a way to choose life.  We walk with the women not just for that moment in time but for years to come.”

Jodi continues, “When you’re out on a sidewalk in an urban city area, people share their stories of regret of abortion so not only do you minister to the people as they are entering or approaching the facility, but you can minister to people who are recovering from something that may have happened in their past.”

Shawn Carney spoke passionately about the mission at the Kickoff event. He has been in the area before speaking at fundraising banquets and awareness events.  This is his first visit to Tampa for a 40 days event in the fall.  (Click here to listen/view Shawn’s talk.)

Some pro-lifers believe some religious leaders of all denominations have been silent or non-committal for too long. Father Bob Romaine of St. Paul Parish in Tampa says, “No more can we be silent, because the faithful do listen to us [clergy], therefore we are called to lead our faithful in the right way.”

Mryna Valle, a parishioner from St. Timothy lending her support believes this coming election is important.

“Our elected leaders are the ones who a lot of people follow. They might not follow their faith, they might not follow God, but they follow and promote what their elected politicians show us.” She continues, “If we as Catholics don’t stand up and say that abortion is wrong, it’s never the answer to anybody’s problems. Some believe that just because it’s legal, it’s alright, and that we should not stand up to the politicians and to the Supreme Court justices who want to leave their faith out the door when they step into the court room, then we are complicit in that movement of promoting abortion.”

Following the presentations, the group migrated to pray in the front of the abortion clinic. As people prayed, one patient pulled into the abortion facility.  Those attending quietly prayed, some wept. A voice gently called out, “Can I talk to you?”  There was no response.

Meanwhile a truck had pulled into the abortion facilitiy.  It was the medical truck that carries the remains of those aborted, as well as used medical supplies.  Many of the directors and volunteers had never seen the truck before today.  The sight of the truck and the events of the morning sent a chill through the crowd.  Some wept and fervently prayed while “Amazing Grace” was softly sung in the background.

If you’d like to find out more about the efforts of the pro-life movement in the diocese, visit dosp.org or ccdosp.org. You can also learn more about the 40 days movement by going to 40daysforlife.com.

We can never speak of the issue of abortion without discussing God’s mercy. There is no sin that is beyond the mercy of God and forgiveness is always available. If you are hurting after abortion we encourage you to visit hopeafterabortion.com