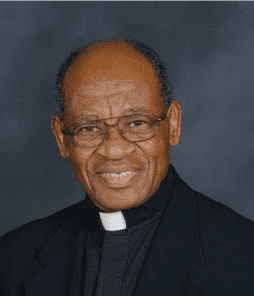 Reverend Callist Nauli Nyambo, 76, a retired priest of the Diocese of St. Petersburg, died on Sunday, January 3, 2016, at Mease Countryside Hospital, Clearwater, after suffering a major stroke shortly before the New Year.

In 1978, he came to the United States, where he attended the Jesuit School of Theology, in Berkeley, California, receiving a Master of Sacred Theology degree in 1982. He then studied at the Catholic University of America, Washington, D.C., where he earned a Master of Arts degree in Religious Education in 1987.

Father Nyambo was the first African priest to serve in the Diocese of St. Petersburg, providing summer assistance to the parish communities of St. Joseph, St. Petersburg (1982) and Blessed Trinity, St. Petersburg (1986, 1987). His first full-time assignment was as Parochial Vicar of Epiphany of Our Lord Parish, Tampa (1988-1989, 1990-1991). While fulfilling the role of Director of the diocesan Office of Black Catholic Ministries, he served as Priest in Residence at Holy Cross Parish, St. Petersburg.

In addition to his parish and diocesan responsibilities, Father Nyambo served as President of the Florida Conference of Offices of Black Catholic Ministry, board member of the National Black Catholic Clergy Caucus, founding President of the African Catholic Clergy and Religious Association in the U.S.A., National Representative for the African Apostolate in the U.S., National Adviser of the USCCB Tanzanian Apostolate, board member of the USCCB Office of Pastoral Care of Migrants and Refugees and National Adviser of the USCCB Subcommittee on the Pastoral Care of Migrants, Refugees and Travelers.

In 2008, Father Nyambo was honored with the Archbishop Silvano Tomasi Award in 2008 by the USCCB Secretariat of Cultural Diversity for his dedicated service to migrants. And in 2012, he received the Servant of Christ Award from the National Black Catholic Congress in 2012.

All funeral services will take place at All Saints Catholic Church, 2801 Curlew Road, Clearwater. Arrangements are as follows:

Bishop Robert Lynch will be the main celebrant

All priests who wish to concelebrate should bring an alb and white stole.

Father Nyambo will be buried in Tanzania at a later date.

Please keep Father Nyambo’s niece, Devota Nyambo, and all surviving family members and loved ones, including his dear friend, Father Hugh Chikawe, in your thoughts and prayers during this difficult time.

May his soul and the souls of all the faithful departed, through the mercy of God, rest in peace!