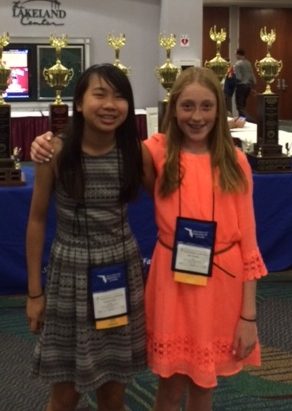 Two students from Espiritu Santo Catholic School recently competed at the State Science & Engineering Fair of Florida and came home with awards demonstrating their hard work and creativity. Congratulations to Lily and Katelyn who traveled to Orlando to participate in the state-wide fair held on March 31 – April 2, 2015. Lily’s project won the “Polk County Regional Science and Engineering Fair Award” for demonstrating outstanding creativity and innovation. Katelyn’s project received the Mu Alpha Award – Certificate of Recognition, awarded to the individual demonstrating the most challenging, thorough and creative investigation of a problem. These projects were singled out among the 11,000 projects represented in the 37 Florida Regional Science & Engineering Fairs held around the state this year. Of those, only 840 projects advanced to the State Science & Engineering Fair. Over 1.8 million science projects were completed in the state of Florida during the 2014-15 school year.