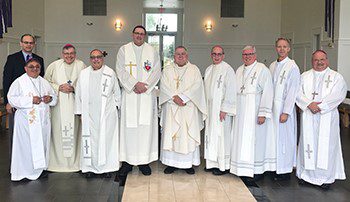 The Florida Catholic Conference (FCC) was established on February 1, 1969, as an agency of the Catholic bishops of Florida. The five founding bishops served the four dioceses comprising the Province of Miami at the time: Archbishop Coleman F. Carroll of Miami; Bishop Paul F. Tanner of St. Augustine; Bishop William D. Borders of Orlando; Bishop Charles B. McLaughlin of St. Petersburg; and Bishop John J. Fitzpatrick of Miami. As the dioceses of Pensacola-Tallahassee, Palm Beach and Venice were established, their respective bishops joined the FCC board of directors. Thomas A. Horkan, Jr., an attorney from Miami, was appointed the FCC’s first executive director and established the office in Tallahassee, Florida’s capital city.

In the mid to late 1960s, Catholic conferences were being established across the country. Archbishop Michael J. Sheehan, in his doctoral dissertation on the State Catholic Conference, stated that in establishing conferences, the Church is putting into practice three “very basic teachings of Vatican Council II…cooperation between bishops of a region, participation of laity in the Mission of the Church and involvement of the Church in the community.”

Since its founding, the FCC has taken an active and cooperative role in the health, education and welfare of the people of Florida. Working with state and federal elected and appointed officials, as well as other stakeholders, the FCC has contributed to many policy areas, including social concerns, such as migrants, housing, health care and criminal justice reform; educational matters, including parochial and public schools; life issues, including abortion, euthanasia and the death penalty; and in matters affecting human sexuality, marriage and the family unit.

For five decades, a nonpartisan voice on behalf of the bishops of Florida has served as a bridge between the ever-widening political divide. Positions on issues of concern are determined by analyzing the moral dimension of public policies based on the Gospel of Jesus Christ and the teachings of his Church. Conference positions do not parallel party platforms or serve to support or oppose elected leaders or candidates. By consistently proclaiming the sanctity of life, protecting the dignity of the human person and promoting the common good, the bishops and staff of the Conference have sought to lead decision-makers to just solutions that allow all Floridians to flourish.

On March 19, 2012, the bishops established the Florida Conference of Catholic Bishops (FCCB), a new corporation, under which policy and advocacy activities related to state and federal legislation and agencies of government continue to be carried out. The earlier established FCC continues to facilitate and provide an easily accessible channel of communication by which the bishops may undertake and direct joint pastoral, educational and social welfare projects. The archbishop and bishops of the seven dioceses in Florida constitute the board of directors of both entities.