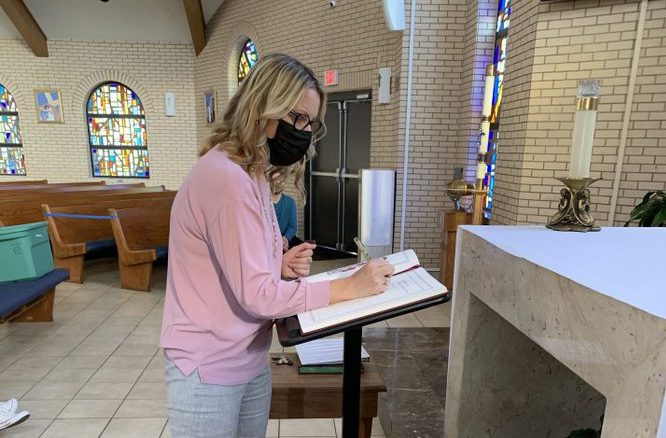 Caption: Jessica signs the Book of the Elect during the Rite of Election in Nativity’s Chapel on the First Sunday of Lent signifying her readiness to be fully initiated into the Body of Christ this Easter Vigil.

Up until a year and a half ago, Jessica Spencer says the last place she thought she would find herself was inside a Catholic Church. Though she attended Mass with her great-grandparents as a child, growing up religion was not a priority for her family. As she grew older, she had a passing interest in the idea of faith, with one exception – she wanted nothing to do with the Catholic faith. Past experiences with Catholicism left her with an impression of a Church that was too rigid and too judgmental for her to find a home there. So how is it that Jessica will be becoming Catholic this Easter? Just as surprised as anyone, she can only answer, “It must be the Holy Spirit.”

“A couple years ago I met Paul Figueroa, a wonderful human being who is a Catholic. He has been a member of Nativity Parish his whole life. For some reason that I can’t explain, I started hoping he would invite me to go to church with him. I felt compelled to go,” remembered Jessica. “When I finally did, a couple of the homilies moved me to tears.”

Jessica soon found that the environment at Nativity was unlike any other encounter with the Catholic faith she had had before. For years, she had been told that her father, who died by suicide, would certainly be in hell. But when she came to Nativity, the messages she heard were of love and acceptance.

“I was surprised to hear suicide talked about one day, and not in a negative way but more focused on the need to help people who are suffering,” said Jessica. “I was shocked. I thought, ‘Am I hearing this correctly?’ That opened me up more and more to the Catholic Church.”

After just a few months, Jessica decided to join the process called the Rite of Christian Initiation of Adults (RCIA) to learn more about the Catholic faith and prepare to become Catholic. Despite the limitations of COVID, she has found a welcoming community to help her on her journey.

“It has been an amazing experience,” said Jessica. “I have appreciated the honesty, openness, and nonjudgmental acceptance. It has helped to not feel pressure or to be pushed or feel the need to be fake.”

Jessica will be one of 20 people being welcomed into the Catholic faith at Nativity this Easter Vigil. Through weekly Zoom meetings, complete with small group “table leaders,” they’ve done their best to recreate the feel of an in-person meeting with prayerful support and the freedom for everyone to be themselves and ask questions. Christina Beu, Faith Formation Director at Nativity, says the main job for herself and her team is to help the candidates and catechumens know the love of God.” (Candidates are people who were baptized in a different denomination and will be received into full communion with the Catholic Church. Catechumens are people who have never been baptized and are preparing to do so in the Catholic faith.)

“People in any kind of discernment process are in a vulnerable place, especially as they are learning a new way of living their faith. The last thing they need to feel is judged,” said Christina. “People come to the Church because they are seeking God, seeking community, seeking acceptance. God loves them already, exactly as they are. It is my work, and that of my team and the parish community, only to help them know that love and acceptance.  Everyone has a place in this community.”

In addition to the weekly catechetical classes, Christina helps the group get to know the Nativity community by introducing a handful of parish ministries or events each month in which they could get involved, some educational, some social, and some service. With over sixty ministries at the parish, there is something for every interest and schedule. Jessica has already joined a Lenten Bible study and is hoping to get involved with Pastoral Care ministries.

She has no doubt that she is where she’s supposed to be.

“I’m at the point where I’m even inviting other people to come to Mass with me!” said Jessica, who will receive the sacraments of Baptism, First Communion and Confirmation at the Easter Vigil with Christina Beu as her sponsor, Rhea Lambert, her small group leader, as her godmother, and Paul, whose invitation started it all, standing in for her godfather. “I’ve had a wonderful experience at Nativity. It has opened my heart to the possibility of it all.”