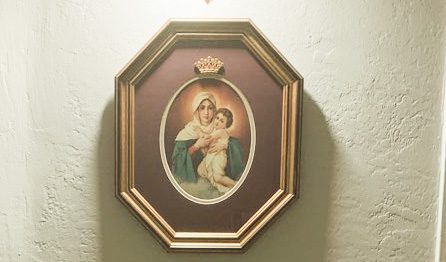 Each morning, Jenny Noalsco wakes up, prepares for the day, and brings her coffee to a corner of her house where she sits before an image of the Blessed Mother, says her prayers, and consecrates her day. She writes down her joys, accomplishments, struggles and concerns and makes them an offering to Mary. Even now that the pandemic has shortened her commute to just a quick walk to her home-office across the house, Jenny says she can’t imagine not beginning her day this way.

“The time really gives you an interior transformation. You receive the love of the Blessed Mother and you can go out and be the disciple you are called to be,” explained Jenny. “That has been one of the blessings of having this place in my home. I call it my heaven on earth.”

Jenny’s prayer corner is called a “home shrine” and the act of offering one’s day to Mary is one of the central practices of Schoenstatt spirituality. Schoenstatt, which means “beautiful place” is an ecclesial movement that came out of Germany in 1914, on the heels of the First World War. Under the direction of Father Joseph Kentenich, a small shrine was dedicated to the patronage of Mary, Thrice Admirable so that students could be inspired to strive for holiness. Father Kentenich proposed that the students enter a “Covenant of Love” or a consecration to Mary.

“In the Covenant of Love we are saying, ‘Mary we ask you to come to this shrine so that people feel your presence, that it would be a place of pilgrimage where people feel your maternal love and where you bestow whatever graces they need,” explained Father Carlos Rojas, associate pastor of St. Cecelia Parish in Clearwater. “In return, we promise to strive for holiness by fulfilling our duties faithfully and consciously, and through an ardent life of prayer.”

As the Schoenstatt movement spread, replica shrines began to be built around the world and eventually home shrines were established in people’s homes, recognizing the important role of the home as the domestic Church.

Father Carlos introduced this idea to his parishioners at Transfiguration Parish last August after they received word that the parish would be closing. He proposed that the community make an offering of their parish to the Father and set-up home shrines while praying for the building of a shrine in the Diocese of St. Petersburg. Now Father Carlos is sharing the Schoenstatt message with his parishioners and with the wider community.

“When I went to work, I wasn’t happy, I felt empty. But now when I come home, praying together and experiencing so much kindness, it’s like a sanctuary for us,” said Victor. He and his wife Sonia created a home shrine a few months ago and says it has been a source of strength for them in a difficult time.

The family had consecrated themselves to Mary two years ago. Tragically, their twelve-year-old son Andres was diagnosed with a terminal brain tumor two months after his consecration. They found comfort in the image of Mary, Thrice Admirable, which could be seen during the weekly livestreamed Mass and was even present in the hospice room as Andres passed away. Victor and Sonia recall their son’s smile at seeing the image and felt that Mary was looking after their family. As they grieve, they find solace in Mary’s presence, made visible through their home shrine, and in learning more about living the Schoenstatt spirituality.

“Schoenstatt was a perfect plan for us on this journey, to discover things in our life to help us get through this more easily. We need a mother in these times,” said Victor.

There are close to 150 families in the Diocese of St. Petersburg who have set-up home shrines and made a Covenant of Love by committing to following the practices of Schoenstatt. Father Carlos has produced a series of 9 video conferences that explain the Schoenstatt movement. The videos, available on the Schoenstatt Tampa Bay YouTube Channel, will prepare viewers to enter the Covenant of Love.

“It’s been an enriching journey,” said Jenny. “Through the daily offerings, we become collaborators, instruments of the Father. Through the Covenant of Love, we entrust our lives to Mary’s love. It has been a growing experience, a blessing to me.”