In 2019, 8 priests in the Diocese of St. Petersburg will celebrate the 50th anniversary of their ordination. They will be recognized by Bishop Parkes during the annual Chrism Mass on Tuesday, April 16. They are: 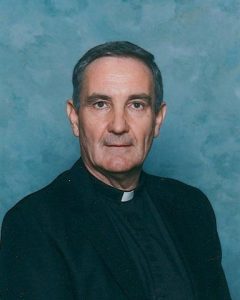 He is originally from Belfast, Northern Ireland.  On June 9, 1969, he was ordained as a priest of the Institute of Charity (Rosminian Order).  In 1973, he was appointed as Parochial Vicar of Blessed Sacrament Parish, Seminole and would be appointed as Pastor in 1978, serving the community as its leader for 39 years before his retirement in 2017.  Today, Father Gordon continues to provide assistance to the parish. 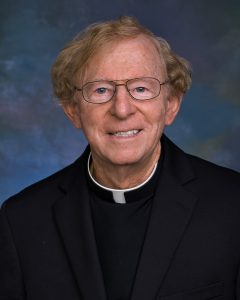 He was born in Limerick, Ireland and was ordained for the Diocese of St. Petersburg on June 8, 1969.  Among the parishes where he served as pastor are Holy Cross, St. Petersburg, St. Stephen, Riverview and St. Cecelia, Clearwater, from where he retired in 2012. Monsignor Irwin still offers assistance to the busy community of St. Cecelia.

He is retired and living in Phoenix, Arizona.  He was born in Boston, Massachusetts and was ordained for the Society of Mary (Marist Order) on November 8, 1969.  He came to our diocese in 1974 and was later accepted as a priest of the Diocese of St. Petersburg, serving the communities of Most Holy Redeemer, Tampa, St. Vincent de Paul, Holiday and Espiritu Santo, Safety Harbor.

He was born in Glenolden, Pennsylvania and was ordained for the Congregation of the Sacred Heart of Jesus on August 31, 1969.  Among his assignments, he served in Texas, South Dakota and Wisconsin, before retiring to the Sacred Heart Residence, Pinellas Park in 2015. 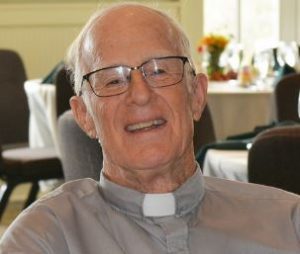 He is a Philadelphia native, who was ordained on September 8, 1969 for the Society of the Divine Savior (Salvatorian Order).  He came to the Diocese of St. Petersburg in 2013 and though retired, he provides ministry in both English and Spanish, primarily assisting at St. Cecelia Parish, Clearwater.

He was born in Brooklyn, New York and was ordained for the Congregation of the Sacred Heart of Jesus on August 31, 1969.  He served for many years as a professor and in administrative roles for his province, as well as in a parish community in Raymondville, Texas.  Father Steve is skilled in American Sign Language and has provided ministry to hearing-impaired Catholics.  He currently resides with his fellow Sacred Heart priests in Pinellas Park.

He first came to the Diocese of St. Petersburg in 2012, along with other members of his community.  He was born in Danbury, Connecticut and was ordained for the Society of Mary (Marist Order) on November 8, 1969.  While in retirement, Father Ridgeway lives in residence at Our Lady of Perpetual Help Parish, Tampa.

He is a native of Portsmouth, Virginia and is a retired priest of the Diocese of Sioux City.  For nearly 50 years, he has provided ministry to carnival workers and their families and was honored for his service by Pope Francis in 2016.  Since arriving in the Diocese of St. Petersburg in 2014, he has provided assistance to English- and Spanish-speaking Catholics in parishes throughout eastern Hillsborough County, most frequently at St. Anne Parish, Ruskin.