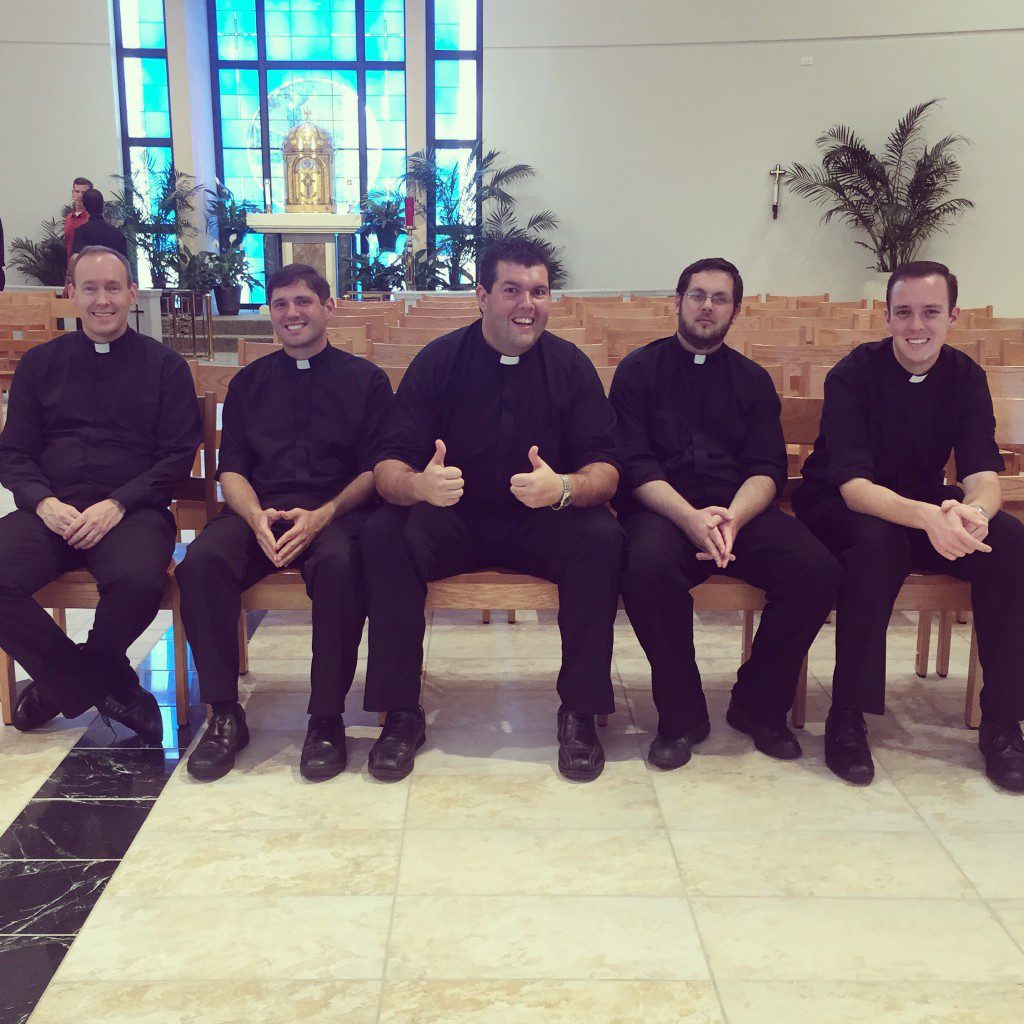 Learn more about our five soon to be priests below.

Ryan Christopher Boyle, of Nativity Catholic Church in Brandon, was born at Yokota Air Base, Japan in 1976.  He grew up in a military family with his parents Gary and Sheryl, and his younger brother, Matthew. After his graduation from Bloomingdale High School in Valrico, he attended the US Air Force Academy, graduating in 1998 with a BS in Management. He then served in the US Air Force flying C-5, C-17, and C-21 cargo planes.

In 2009 Ryan entered the seminary for the Diocese of Saint Petersburg, graduating in 2011 from St. John Vianney College Seminary with his Bachelor of Philosophy degree. Ryan then began his studies at the North American College in Rome where he will graduate in June 2015. He is co-sponsored by the Archdiocese for the Military Services, USA and will later serve as a Chaplain in the Air Force.

As a seminarian for the Diocese of St. Petersburg, Ryan has served in the following parishes: Our Lady of the Rosary (Land O’Lakes); St. Ignatius of Antioch (Tarpon Springs) and Christ the King (Tampa).

Reverend Ryan Boyle will return to Rome after his ordination to continue his studies. He will return to the Diocese of St. Petersburg in 2016 for his first priestly assignment.

Curtis Victor Carro was born in 1985 to Victor and Vanessa Carro in Clearwater. His home parish is St. Jerome Parish in Largo. Curtis has two brothers: Greg and Justin. He attended elementary school at St. Cecelia Catholic School and Blessed Sacrament Catholic School in Seminole and graduated from Seminole High School. In 2003, he began studies at the Florida State University College of Business in Tallahassee. He graduated from FSU in 2007.

In 2008 he entered Saint John Vianney College Seminary.  In 2010 he began his theological studies at Saint Vincent de Paul Regional Seminary.  For the last two years he has pursued catechesis training for the youngest of children ages 3 to 8 in the Catechesis of the Good Shepherd.

As a seminarian for the Diocese of Saint Petersburg, Curtis has served in the following parishes: Our Lady of Lourdes (Dunedin); Saint Anthony the Abbot (Brooksville) and Saint Paul (St. Petersburg).

Steven “Chuck” Dornquast was born in 1988 in Zephyrhills, Florida. He celebrated all his sacraments at his home parish of St. Joseph. He attended public schools growing up and was active in sports, school activities and his parish.

He entered seminary directly from high school and is grateful that the Lord invited him to spend such formative years in the Seminary. He enjoys weightlifting, playing golf and sports, painting ceramics and DIY projects.

As a seminarian for the Diocese of Saint Petersburg, Chuck has served in the following parishes: Our Lady of the Rosary (Land O’Lakes); Our Lady of Lourdes (Dunedin); Nativity (Brandon); Our Lady of Perpetual Help (Ybor City); Light of Christ (Clearwater); Most Holy Redeemer (Tampa) and St. Mary in Pahokee.

William “Bill” Santhouse was born in 1982 in Mineola, New York.  He moved to Florida at the age of three.  He has a younger brother and two younger sisters.  Bill attended Palm Harbor University High School and attended the University of South Florida for 2 years, after which he decided to explore a calling to the priesthood.

His home parish is St. Ignatius of Antioch in Tarpon Springs. Bill graduated from Saint Vincent de Paul Regional Seminary on May 7, 2015 with a Masters of Divinity.  His hobbies include basketball, chess, and video games.  What attracts Bill to the priesthood is his desire to be a father to many people.

While a seminarian for the Diocese of Saint Petersburg, Bill has served in the following parishes: Light of Christ (Clearwater); St. Lawrence (Tampa); Nativity (Brandon); Cathedral of St. Jude (St. Petersburg) and Our Lady of Lourdes (Dunedin).

Reverend Bill Santhouse will begin his first priestly assignment as Parochial Vicar at Christ the King Parish in Tampa, Florida.

Anthony John Ustick was born in 1988 in Clearwater, Florida. His home parish is Saint Matthew in Largo. He is the youngest of the three children of John and Marla Ustick. Along with his older brother and sister, Anthony was homeschooled for all of his education until he graduated in May of 2007. During his junior and senior years of High School, he took Dual Enrollment classes at St. Petersburg College. Throughout his high school years, he volunteered at a number of places, including St. Vincent de Paul Soup Kitchen, Bay Pines Medical Center, Blossom Montessori School for the Deaf, and T.H.O.R.N. Ministries.

As a seminarian for the Diocese of St. Petersburg, Anthony has served in the following parishes: St. Lawrence (Tampa); Cathedral of St. Jude the Apostle (St. Petersburg) and St. Stephen (Valrico).

Reverend Anthony Ustick will begin his first priestly assignment as Parochial Vicar at the Cathedral of St. Jude the Apostle in Saint Petersburg.