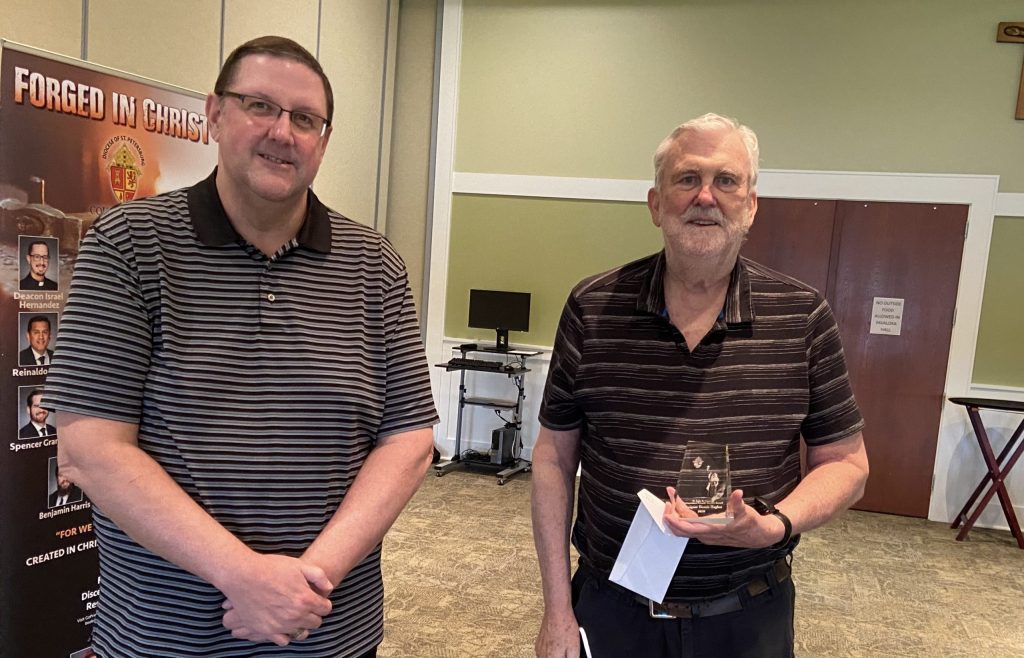 Monsignor Dennis Hughes was announced as the recipient of the 2020 Fr. Luis Distinguished Priestly Service Award on Tuesday, October 6. This award is given annually to a priest serving in the Diocese of St. Petersburg who best exemplifies selfless and dedicated service to the people of God. The recipient of the award is chosen by his brother priests. This year, the award was given during one of two “Celebrating Priesthood” events, socially distant gatherings of priests for fellowship and spiritual support that replaced the annual Priests’ Convocation this year, due to COVID-19.

Monsignor Dennis Hughes was born in Tampa, Florida on June 21, 1949.  He attended Bishop Barry High School (now St. Petersburg Catholic High School).  In 1967, he began his seminary training at the Pontifical College Josephinum in Columbus, Ohio and later at St. Vincent de Paul College Seminary, Boynton Beach, Florida, where he earned a Bachelor of Arts in Philosophy in 1971. He then transferred to St. Meinrad Seminary, in Indiana, where he was received Master of Divinity degree in 1975. He was ordained to the priesthood for the Diocese of St. Petersburg by Most Reverend Charles B. McLaughlin on May 10, 1975.

After serving as Pastor of St. Anthony of Padua Parish and School, San Antonio (1996-2000), and St. James the Apostle Parish and Bishop Larkin School (2000-2006), Monsignor Hughes was granted a 6-month academic sabbatical in 2006.  Upon his return to the Diocese of St. Petersburg, he was appointed as temporary Parochial Administrator of Sacred Heart Parish, Pinellas Park.  In July 2007, after evaluating the population explosion in south Pasco County, Monsignor Hughes was selected by Bishop Robert N. Lynch to serve as Administrator and later, Pastor of the newly established St. Peter the Apostle Parish, Trinity, where he remained until his retirement on July 1, 2019.

In February 2016, at the request of Bishop Lynch, Pope Francis conferred him the honorary title of Chaplain of His Holiness, or Monsignor.

In addition to his parish assignments, Monsignor Hughes has also assisted in several diocesan positions.  Among them, he has served as Vice-Chancellor, Director of Vocations, Member of the Priest Personnel Board and Incardination Committee, Chaplain for the Knights of Columbus and Worldwide Marriage Encounter and Vicar Forane of the Pasco Deanery.

Since his retirement, Monsignor Hughes has continued to provide assistance to parishes within the Diocese.