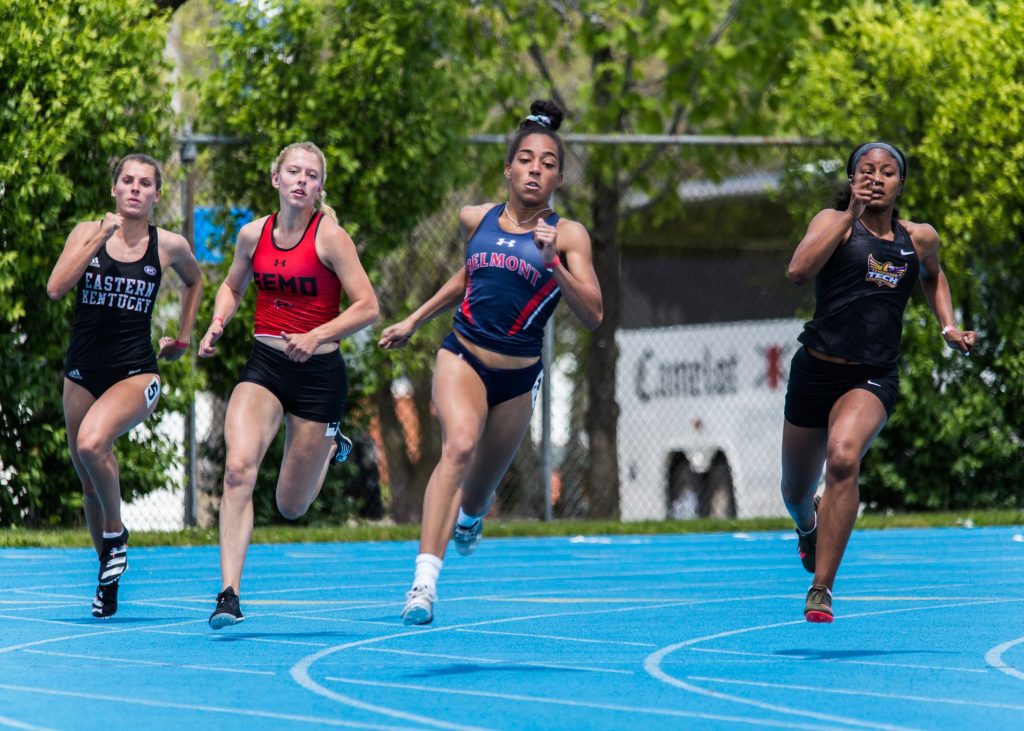 (CNS) — Coming into this track and field season, Adreanna Parlette was trying to recapture the form that made her a star at St. Cecilia Academy in Nashville.

She ended up exceeding even her expectations, qualifying June 24 at the U.S. Olympic Team Trials in the long jump in Eugene, Oregon, and finishing 17th out of 24 women competing for three spots on the Olympic team.

“She’s in pretty elite company,” said Cameron Harvey, associate head coach of the track and field team at Belmont University, which also is in Nashville and is where Parlette competes on the collegiate level. After qualifying for the Olympic Trials, “no matter what happens, you are among a very small percentage of female athletes,” he said.

“I was competing against the best of the best,” said Parlette, who graduated from St. Cecilia in 2017. “It was exciting. I didn’t feel any pressure. I felt like I belonged.”

That wouldn’t have been the case before she transferred from Jacksonville University in Florida to Belmont in 2019.

Parlette had lost a lot of confidence, Harvey said. “There were some struggles believing she could still compete.”

But Harvey, who remembered Parlette when she competed at St. Cecilia, told her, “I think there’s potential for you to be back to where you were.”

During the indoor track season in the winter of 2019-20, Parlette started to show improvement. “Then COVID hit,” Harvey said.

The break in competition turned out to work to Parlette’s advantage. “I didn’t really believe in myself that much,” Parlette told the Tennessee Register, newspaper of the Diocese of Nashville. “COVID came and I had an opportunity to address that component in my life.”

Parlette stepped up her training during the pandemic, focusing on the mental aspect of the sport.

When she returned to competition this spring, the improvement was apparent. She was named the Ohio Valley Conference Female Field Athlete of the Year. At the conference championships, she won the long jump, finished second in the heptathlon, fourth in the 110-meter hurdles and seventh in the high jump. She also qualified for the NCAA East Regional.

She set a personal and school record in the long jump at a meet in April with a jump of 6.50 meters, or 21 feet, 4 inches. After that jump, “I started wondering what the mark is to qualify for the trials,” Harvey said. “She might have a chance.”

“It was a long journey” to qualify for the trials, Parlette said.

Before the trials, she heard from her former teachers and coaches at St. Cecilia, “They’ve been people who’ve supported me post high school,” Parlette said. “They mean more to me than just high school teachers. I will stand by that school. I think they do great things there.”

Parlette and her twin sister, Isabella, were students at J.T. Moore Middle School when they applied at St. Cecilia. Their aunt had graduated from St. Cecilia, and “my mom always wanted me and my twin sister to go get a private education.”

The staff at St. Cecilia worked hard to get the Parlettes the financial assistance they needed to attend, she said. “That’s who they are,” Parlette said. “They supported me and my sister since before we even got there.”

She got more of that kind of support during her four years at St. Cecilia, Parlette said. “I had a community,” she said. “St. Cecilia pushed me to do everything.”

Besides track, she was involved in advanced choir and the theater guild. “St. Cecilia helped me to thrive in a busy schedule,” said Parlette, who became a Catholic while at St. Cecilia and now attends St. Ann Church in Nashville. “Going off to college, I definitely was prepared from that standpoint.”

Parlette will graduate Aug. 13 from Belmont with a degree in corporate communications and marketing. She has one more year of eligibility left and plans to compete next year as a graduate student. She’ll be studying strategic communications and leadership.

She will have a new goal on the track: to do well at the U.S. Track and Field National Championships. “I’d probably be going against the same people I saw at trials.”

Photo Caption: Adreanna Parlette, center, a 2017 graduate of St. Cecilia Academy in Nashville, Tenn., will compete in the long jump for the U.S. during the Tokyo Olympics July 23-Aug. 8, 2021. She will graduate from Belmont University in August and was named the 2021 Ohio Valley Conference’s Female Field Athlete of the Year. (CNS photo/Belmont University, courtesy Tennessee Register)