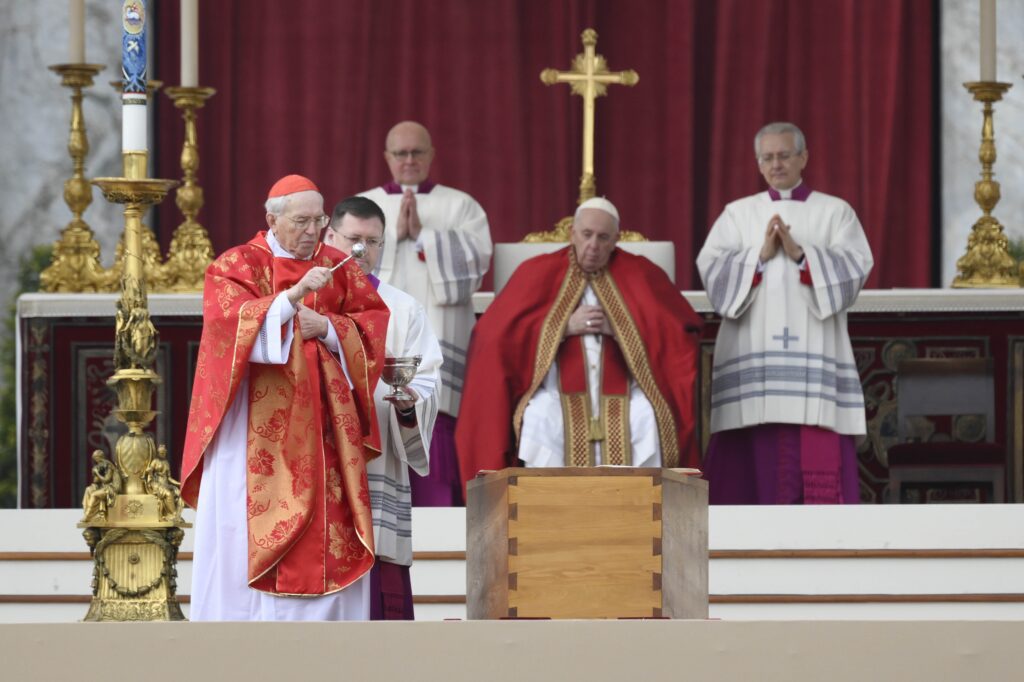 VATICAN CITY (CNS) -– Just before 7 a.m. Jan. 5, the dome of St. Peter’s Basilica was so shrouded with fog that it was scarcely visible. Yet the sounds of German folk music permeated the dense air as some 500 traditionally dressed Bavarians descended upon the Vatican to attend the funeral of their beloved countryman, Pope Benedict XVI.

Although they traveled some 10 hours to pay their final respects to the late pope, the mood in St. Peter’s Square in the hours leading up to the historic funeral was much more festive than somber. Several Bavarian pilgrims told Catholic News Service it was an opportunity to celebrate the life of the first German pope since 1057, and to showcase their pride in the region he came from.

Manuel Kustermann, dressed in lederhosen, toted a large bass drum bearing the insignia of his hometown as he marched into the square.

“It’s crazy to see all these people here dressed up like this, because usually we just see all of this at home,” he said. “I think we can add our little part to this ceremony by playing some music from Bavaria, the kind of music Benedict grew up with.”

Pilgrims from all over the globe who gathered in the square were eager to recount their memories of the late pope and share how he affected their lives and their faith.

A group of 20 women, members of the Notre-Dame de Vie secular institute, drove 12 hours from southern France to attend the funeral. One member of the group, Marguerite Mouton, said she had seen the late pope on four different occasions, and didn’t want to miss the chance for a fifth.

“We are the church, so we wanted to gather with the church, here in person, for this moment,” she told CNS. Pope Benedict “taught me what it means to believe simply. To be a humble worker in the vineyard of the Lord.”

Others in the crowd were happy to get a front row seat to the historical event while on vacation. Crys Keler Formentin from Brazil, along with four friends, stood in St. Peter’s Square with their luggage. They had come to the Vatican straight from the airport after hearing that Pope Benedict’s funeral was the day they were arriving in Rome on tickets purchased months ago.

“It’s very exciting to be here and be able to witness this event that has no precedent, no protocol,” she told CNS. “My family is Catholic, so I had seen (Pope Benedict) a lot on television. He’s famous in my house.”

Nearby Karolina Hejka, a Polish woman, was standing alongside a bright pink floral suitcase and an overnight bag; she also said being present for the funeral was a surprise.

“I am only in Rome for a few hours, but I didn’t want to miss this. It only happens once in a lifetime.”

Sergio Innocenti from Genoa told CNS he brought to the funeral a rosary Pope Benedict had blessed during the closing Mass of World Youth Day 2011 in Madrid. As he raised his hands to convey the amount of rain that poured down on the more than 1 million young people gathered for Mass that day, a Paraguayan woman from across the aisle recognized the story and interjected in Spanish — “I was there, too!

“That is the image of him in my mind,” she added, “that of the captain of a ship suffering through a storm.”

“It was a mess, people started to leave, but we stayed there,” she said. “He gave us the strength to remain there with him.”

Fiona-Louise Devlin and John Patrick Mallon wore scarves from Pope Benedict’s 2010 trip to their native Scotland. They said they bought their tickets to Rome the day the late pope died to give thanks for how he shaped their faith.

While posing for photos with their scarves extended, the pair fought back their smiles, and Devlin explained why: