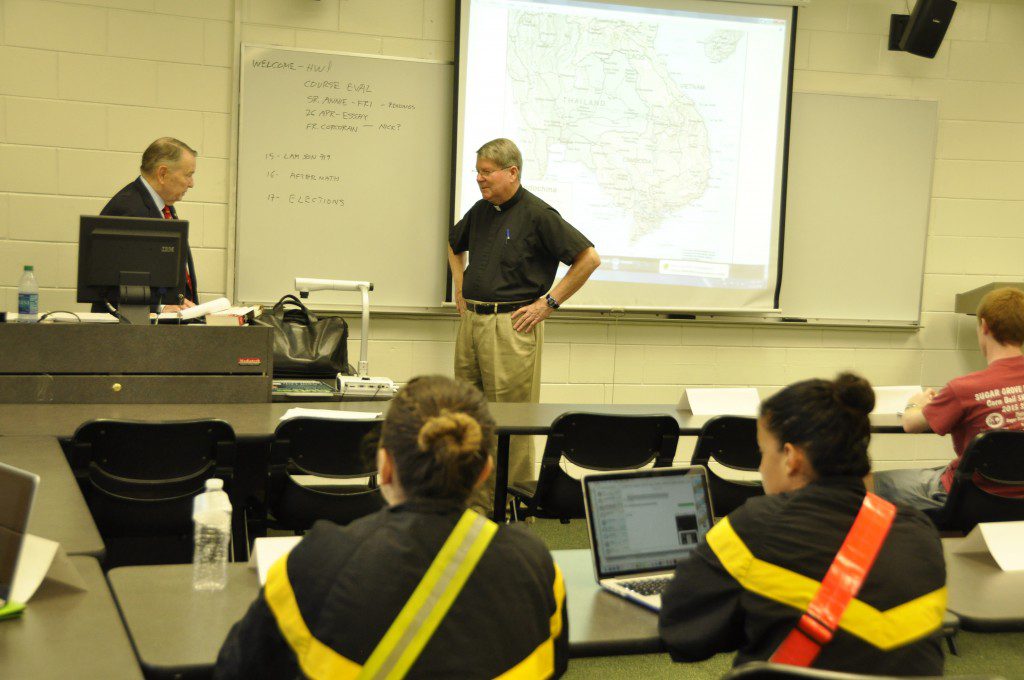 Two members of the Diocesan religious community fulfilled the seemingly unusual request recently of serving as guest speakers for a Saint Leo University class on the history of the Vietnam War.

Rev. Timothy Corcoran of St. Mary Parish in Tampa, and Sister Annie Dougherty, president and chief executive of The Franciscan Center in Tampa, visited the undergraduate class separately at the invitation of history instructor Tom Draude. The teacher also served three tours in Vietnam, and retired as a brigadier general from the U.S. Marine Corps. He likes to bring people who experienced modern history into his classes as speakers, and in these cases, the Catholic guests were able to provide two distinct perspectives as the end of the semester approached.

Father Corcoran visited on a Wednesday morning, telling students mainly about his experiences in 1969 and 1970 in the U.S. Navy (long before he was ordained), when he was an intelligence officer in Vietnam. He was assigned to work with U.S. Army forces to help block North Vietnamese shipments of military supplies over river and land routes. The Americans worked with the South Vietnamese Navy. In addition to explaining geography and military strategy, Father Corcoran shared cultural observations. He recalled that in the town where he was stationed, the parish priest was the most influential person because of the strong Catholic influence in the community. Father Corcoran shared that he still retains a “sense of accomplishment for the service I performed.” He stated that he never witnessed or heard of any dishonorable conduct or wartime abuses directed toward the Vietnamese while he was “in country.”

At the next class session on a Friday, Sister Annie was called upon to talk about social and military history leading up to the war, and why Vietnam presented so many ethical challenges to many in the country. She brought the class back to the history of Saint Francis of Assisi. Then she guided them through the evolution of a Catholic peace movement involving the influence of Dorothy Day, Daniel Berrigan, Thomas Merton, the impact of television, and the role of peacemaking in faith as later articulated (1993) by the U.S. Conference of Catholic Bishops. Throughout, Sister Annie noted the human difficulty of praying for one’s persecutors and loving one’s enemies. “And if you don’t agree with this presentation, that’s fine,” Sister Annie assured the students.

General Draude, who likes to say that history is all about people and the decisions they make, was gratified by the speakers’ generosity of time. “Our students had a golden opportunity to hear and examine different views on Vietnam and the choices made by our two gifted speakers,” he said. “These were truly two unique learning experiences!”

General Draude and his wife Marysandra are members of a Tampa parish, the Epiphany of Our Lord Catholic Church (also home to St. Joseph Vietnamese Mission).