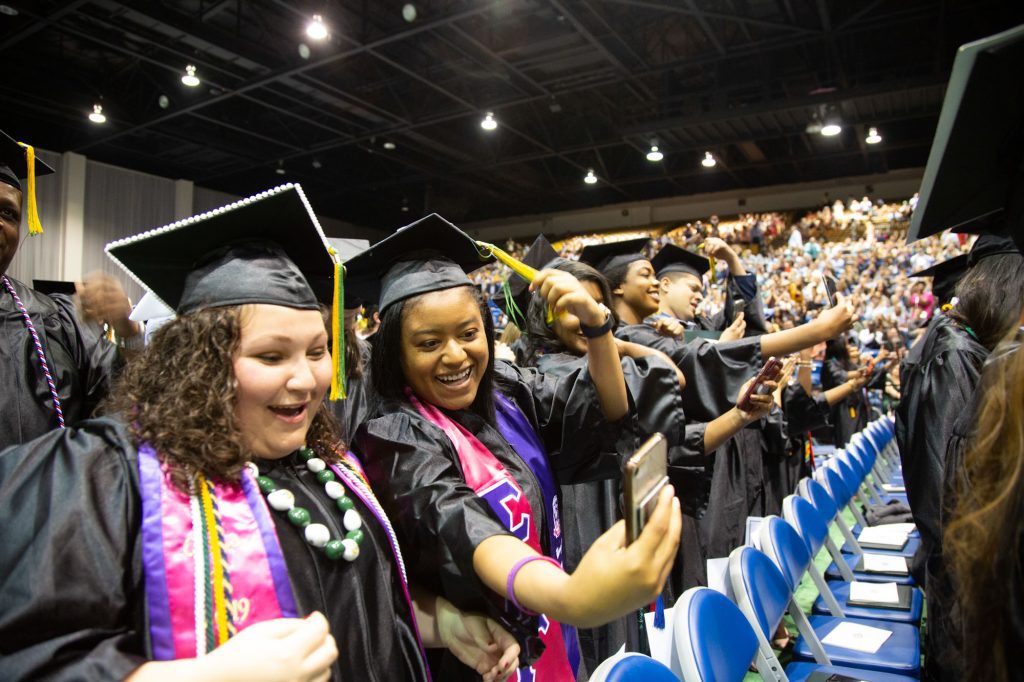 The Saint Leo University community came together to celebrate the achievements of the Class of 2019 with two commencement ceremonies at the Florida State Fairgrounds in Tampa, FL, on Saturday, April 27. The university awarded more than 1,250 bachelor’s, master’s, doctoral, and associate degrees.

The festivities kicked off on Friday, April 26, at the main campus in Pasco County with Baccalaureate Mass celebrated by former university president, Monsignor Frank M. Mouch, followed by the Saint Leo Under the Stars celebration. For many of the graduates, this was the first time they stepped foot on campus as they studied online and at more than 30 education centers in seven states. Saint Leo teaches at locations in Tampa (at Channelside and MacDill Air Force Base); on three Pasco-Hernando State College campuses; and in Lakeland, Ocala, Tallahassee, Gainesville, Lake City, Madison, Jacksonville, and at Naval Station Mayport and Naval Air Station Key West.

More than 675 degrees were awarded to University Campus undergraduate students (bachelor’s and associate degrees) and Tapia College of Business graduate-level students during the morning ceremony.

“Where might you be in 45 years?” Tepper asked the graduates. “What path will you take?”

Her advice to the Saint Leo graduates was to be kind and make others feel worthy, supported, and encouraged.

Outgoing Board of Trustees member Sheila M. McDevitt was presented the degree Doctor of Humane Letters, honoris causa, by President Senese for her many years of service to Saint Leo.

Some of Saint Leo’s bachelor’s degree recipients already know what organizations, public schools, and companies will become their employers. In some cases, they found these positions through internships they completed while at Saint Leo.

Just a few of the new graduates poised to make exciting career steps include:

Selected to give the Class of 2019 farewell to those earning graduate degrees from the Tapia College of Business was Melissa Perry of Tampa, FL, who earned her Master of Accounting degree. She is a research manager at a local TV station.

“Every single one of you shares a story like mine, not exact, but all of you are made up of short stories that include adventure and adversity throughout your existence, and somewhere in your story you sought wisdom to further your journey and today commences a new chapter,” Perry told the graduates

“So, my advice is for you to put God first in your life. Give him your all. No matter where you are today in your story, before you were formed in the womb, he knew you [and approved of you as his chosen instrument]. He set each and every one of you apart for a God-given purpose.”

Juliette Stratis of Lithia, FL, gave the Class of 2019 farewell to the undergraduates. Stratis earned a Bachelor of Arts degree in communications. She served as vice president of communication management for the Student Government Union and is a member of Alpha Sigma Tau sorority.

“Looking at you all, these are the people who made Saint Leo our home away from home,” Stratis said. “These are the ones we shared all of our late nights in our living rooms our best and worst days, and our successes and failures. As we step into this new world of adulting, I think I speak for everyone when I say I’m nervous of what to expect.

“I will leave Saint Leo with so much love and confidence, that I know no matter where each of us are going, this [the university] will always be our home away from home, these will always be our people, and because of that, we’re going to make it.”

At Saint Leo’s afternoon commencement ceremony, nearly 600 degrees were awarded. Participating were Saint Leo WorldWide online and education center students earning bachelor’s and associate degrees, and graduate-level students from the College of Arts and Sciences and the College of Education and Social Services. At this ceremony, there were 150 online graduates and nearly 200 education center students participating.

The guest speaker was Pasco County (FL) Sheriff Chris Nocco, who has served as sheriff since being appointed in 2011. He was elected to the position in 2013 and re-elected in 2017. Nocco was presented with the degree Doctor of Humane Letters, honoris causa, by President Senese.

Nocco advised the graduates to approach their life paths with the same levels of awareness, care, and compassion that law enforcement officers advise motorists to use in planning road trips and in driving each day.

Have a plan, but accept detours as opportunities, he said. Choose passengers with care, lend a hand to those in distress, do not litter, and remember the road is never about just one driver. And do not let your mind and heart go to cruise control during your life, he cautioned. “Dream. Imagine. Create. Take in everything around you,” he said. You will want to end the journey having become a better person than when you began, he said.

Giving Class of 2019 farewells were Timothy Robinson of Jacksonville, FL, and Camille Campins-Adams of Odessa, FL.

“I came to our school as a transfer student, I began my education at St. John’s University in Queens, NY,” Robinson said. “When I realized that although I am proud to serve our nation, my true calling is to serve a more local community, I knew I needed to complete my criminal justice degree.

“My fellow graduates we all have our own story, but one thing we have in common is that we all worked diligently to balance career, family, and school to finally stand before this great audience donned in this sharp academic regalia,” Robinson continued. “Today is our day to rejoice in this accomplishment.  However, my fellow graduates, our work is not yet done; there are more challenges that await us, but we will conquer them because we are Saint Leo University Lions.”

Campins-Adams received her Master of Arts degree in creative writing. She is the author of the top 100 MLB blog, “My Serendipitous Life as a Baseball Wife,” co-founder of The Storytellers Alliance, and active volunteer in her church community.

“The Master of Arts in Creative Writing program at Saint Leo has been an enormous blessing in my life,” Campins-Adams said in her speech. “For a long while before I decided to go back to school, I was living in a season where my focus was primarily on those who relied on me; I was pouring every part of me into my family and my children, leaving nothing for myself.  I had tied my calling in life and subsequently, my identity, with being the perfect wife, mother, and Catholic, and this left me unfulfilled.  But even in the time I spent dedicated entirely to my family, I held on tightly to my passion for the written word.

“God gave me my own unique gifts as he has you and it is our duty to use these gifts to bless those around us by following that calling,” Campins-Adams advised her fellow graduates. “Our calling is what brings us to life and so I urge you to follow yours.”

Saint Leo University (www.saintleo.edu) is a modern Catholic teaching university that is firmly grounded in the liberal arts tradition and the timeless Benedictine wisdom that seeks balanced growth of mind, body, and spirit. The Saint Leo University of today is a private, nonprofit institution that creates hospitable learning communities wherever students want to be or need to be, whether that is a campus classroom, a web-based environment, an employer’s worksite, a military base, or an office park. Saint Leo welcomes people of all faiths and of no religious affiliation, and encourages learners of all generations. The university is committed to providing educational opportunities to the nation’s armed forces, veterans, and their families. Saint Leo is regionally accredited to award degrees ranging from the associate to the doctorate, and the faculty and staff guide all students to develop their capacities for critical thinking, moral reflection, and lifelong learning and leadership.

The university remains the faithful steward of the beautiful lakeside University Campus in the Tampa Bay region of Florida, where its founding monks created the first Catholic college in the state in 1889. Serving nearly 12,000 students, Saint Leo has expanded to downtown Tampa, to other sites in Florida and beyond, and maintains a physical presence in seven states. The university provides highly respected online learning programs to students nationally and internationally. More than 93,000 alumni reside in all 50 states, in Washington, DC, in three U.S. territories, and in 76 countries.