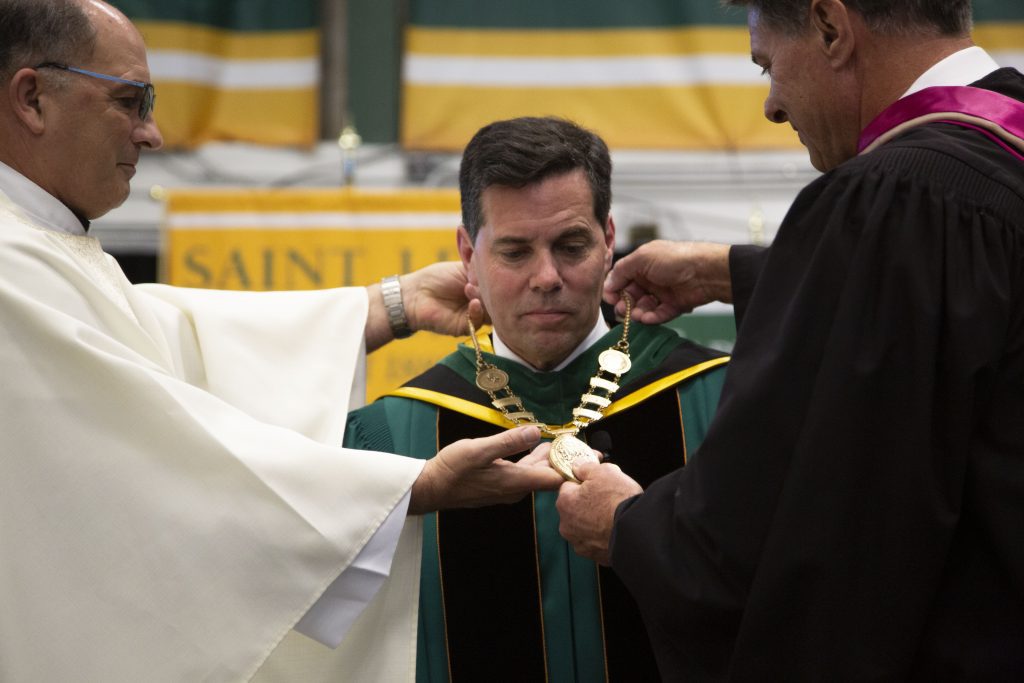 Saint Leo University’s 10th president in its 130-year history was inaugurated Friday, October 11, in a ceremony in the Marion Bowman Activities Center that incorporated the university’s Catholic heritage and its commitment to student-centered education.

The ceremony included the Green Line of alumni, who represented graduates dating back to the Class of 1947 when Saint Leo operated as a college preparatory school, and the Gold Line of students, which was comprised of Saint Leo students from the university’s education centers in seven states, online programs, graduate programs, and University Campus. Delegates from other colleges and universities as well as Saint Leo faculty and administration also were featured in the processional.

Senese made the Oath of Fidelity using the Douay-Rheims Haydock Bible, published in 1893, establishing a new tradition at Saint Leo University, in which future university presidents will take the oath using the same Bible. Another Douay-Rheims Haydock Bible has an important role in American history, having been the Bible used in the inauguration of the first Catholic president of the United States, John F. Kennedy.

Saint Leo University Board of Trustees Chair D. Dewey Mitchell presented Senese with the symbols of the office including the presidential medallion. At its center, the gold medal bears the university seal while the chains feature engraved plaques containing the university’s core values—community, excellence, integrity, personal development, respect, and responsible stewardship.

“We at Saint Leo have a been bold leader in the history of higher education,” Senese said. He said the university educated military students early on and at a time when it was not popular. Today, nearly 5,000 military-affiliated students attend Saint Leo. The university also began offering online education prior to other universities and before it became common. Now, the university offers classes online and in blended formats to meet the needs of students wherever they may be and at the times they need them.

The newly inaugurated president looked to the future of Saint Leo—the promise of growth in the number of students served, the addition of new programs, the expansion of physical locations, and the creation of partnerships among universities. And through the future, the university will remain dedicated to its core values, Senese said.

“Teaching and learning will always be the core mission of Saint Leo University,” Senese said. “It is and will be a university boldly audacious in its actions and humble in its spirit, as well as enthusiastic in its commitments.”

As Saint Leo University’s 10th president, Senese has implemented a foundational three-year strategic plan to grow the university, strengthen its culture, and transform the educational experience to better serve the needs of students.

There were many events throughout the week preceding the inauguration including a business-industry council meeting; a criminal justice panel discussion; the fall student concert; students vs. staff kickball game; scholarship fundraisers; Fall Family Festival; men’s soccer game; and fireworks.

Saint Leo University is one of the largest Catholic universities in the nation, offering nearly 60 undergraduate and graduate-level degree programs to more than 19,500 students each year. Founded in 1889 by Benedictine monks, the private, nonprofit university is known for providing a values-based education to learners of all backgrounds and ages in the liberal arts tradition. Saint Leo is regionally accredited and offers a residential campus in the Tampa Bay region of Florida, 32 education centers in seven states, and an online program for students anywhere. The university is home to more than 95,000 alumni. Learn more at saintleo.edu.