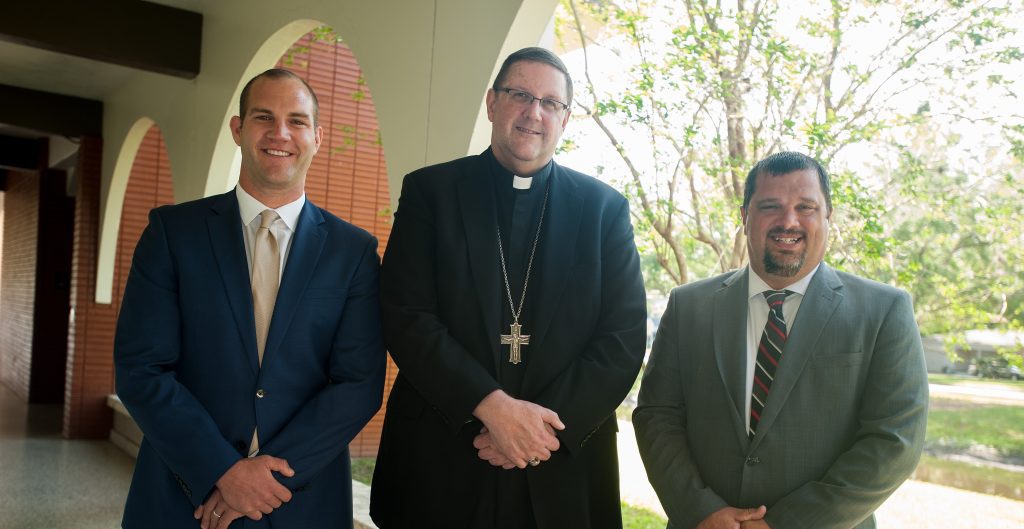 A new leadership model has been introduced at St. Petersburg Catholic High School to more intently advance the mission of the school. Effective July 1, 2019, Dr. Daniel Zepp will serve as newly appointed president, while Ross Bubolz will join him in shared leadership ministry continuing as principal of the school. This expanded model was introduced after the school underwent a Strategic Staffing Assessment, Visioning, and Planning Process that was facilitated by a national consulting firm in Catholic education, The Advancement Counsel Inc.

This change comes during a time of renewed growth in campus facilities and programs.

Zepp shared, “I am humbled and honored to serve as the first lay President of St. Petersburg Catholic High School. I thank Bishop Parkes for this appointment and the Board of Trustees & Consultative Board for their unwavering support for the mission of this wonderful school.” Bubolz noted, “This is a moment of great joy and grace for me, personally, and for our school community, as Dr. Zepp and I join in shared leadership ministry advancing the institutional and educational mission of St. Petersburg Catholic High School.”

Biography for Dr. Daniel Zepp:
Dr. Zepp is a Boston College “Triple Eagle,” earning a Ph.D. in Higher Education Administration, M.A. in Pastoral Ministry, and B.S. in Management from the university. Dr. Zepp was also the beneficiary of a four-year full athletic scholarship for football at Boston College. His vision for Catholic, liberal arts education has been shaped by over thirteen years of experience teaching, advising, and counseling students and eight years of experience consulting, strategically planning and assessing mission and identity with administrators and faculty on middle, secondary, and postsecondary levels, with partners such as Boston College, Baylor University, and St. John’s Preparatory School (MA). Dr. Zepp has been published in Church Life (University of Notre Dame), Religion &  Education, and ACPA Developments and is a contributing author in Social Media in Higher Education. He has served on the faculty at Boston College, University of Louisville, and Merrimack College. Dr. Zepp has given over forty scholarly presentations at national conferences, colleges and universities, Catholic boys’ schools, Catholic parishes and parachurch organizations on topics such as masculinity, faith development, dating and relationships, and Catholic and Jesuit education, with partners such as Boston College High School, Xaverian Brothers High School (MA), and Bentley University. Preceding his appointment as President, Dr. Zepp served for three years as the Director of Advancement at St. Petersburg Catholic High School. He also serves on the University of South Florida Digital Marketing Advisory Board and the Cathedral School of St. Jude Advisory Board. Dr. Zepp and his wife, Avila, moved to St. Petersburg in 2016. They met as students at Boston College and are active parishioners at St. Paul Catholic Church in St. Petersburg.

Biography for Mr. Ross Bubolz:
Mr. Bubolz was born and raised in Jefferson, Wisconsin, a little town located almost halfway between Madison and Milwaukee. While in high school, he met his wife Nicole and they were married in April of 1994. They began their family with their daughter Kennedy, followed by eight more children: Sterling, Micah, Simon, Salome, Anika, Avery, Thaddeus and Trason. He loves to golf, camp with his family, spend time at the beach, and ride his bike. Shortly after graduation from the University of Wisconsin-Platteville, they moved to the Chicago area and began working at Glenwood School, a private residential school for underprivileged students, many with learning or social/emotional disabilities. Mr. Bubolz served as a PE teacher, 5th-grade teacher, and a dean of students. In the evening, Mr. Bubolz and his wife ran a residential hall on the campus. While teaching at Glenwood School, Mr. Bubolz completed his Masters in Educational Administration from Keller Graduate School of Management, earned his Type 75 Administrative Certificate from the State of Illinois and accepted his first position in Catholic schools as an assistant principal at St. Peter School in Geneva, IL. At the time of his appointment to St. Peter the family moved to Sycamore, IL. After two years serving as assistant principal, he accepted the principal position. He served two more years at St. Peter in that role. After his stay at St. Peter, St. Mary’s School in Sycamore called to ask if he would consider being their principal. The opportunity to lead the school his children attended was too good to pass up and he accepted the position. He spent the next six years leading the school to many successful outcomes, including becoming a 90th percentile school in the IOWA Tests, standards-based grading, and a building campaign that added a new office area, six classrooms, a science lab, and new youth ministry offices. Mr. Bubolz and his family moved to St. Petersburg in July of 2014 to accept the position as principal of the Cathedral School of St. Jude. They grew weary of the northern winters and had fallen in love with the St. Petersburg/Tampa/Sarasota area from vacations and several school trips with St. Mary’s School. Mr. Bubolz has a married daughter and a grandson, a son in the Navy getting married in October, a daughter at the University of Central Florida, a son at Florida State University, a daughter at Saint Leo University, two children at St. Petersburg Catholic High School, and two children at the Cathedral School of St. Jude. His wife is also a bookkeeper for the Diocese of St. Petersburg. Mr. Bubolz has served as the Principal of St. Petersburg Catholic High School since 2017. He looks forward to many wonderful years of service for St. Petersburg Catholic High School and the Diocese of St. Petersburg.