After many years of preparation through prayer, study and discernment, Anthony Astrab, Ralph D’Elia and Joshua Hare were ordained to the Catholic priesthood on May 18, 2019 at the Cathedral of St. Jude the Apostle in front of nearly 1,000 friends, family and supporters. All three were born in the Tampa Bay area. (Click here to view the ordination photo albums.)

During the two-hour liturgy, the young men promised to live out the call that God has placed in their hearts.

In front of all gathered, they committed to celebrate faithfully and reverently, in accord with the Church’s tradition, the mysteries of Christ, especially the sacrifice of the Eucharist and the sacrament of Reconciliation, for the glory of God and the sanctification of the Christian people.

“Being ordained a priest today, you are consecrated to celebrate the sacraments, in particular, the Eucharist, the source and summit of our faith,” said Bishop Gregory Parkes during his homily. 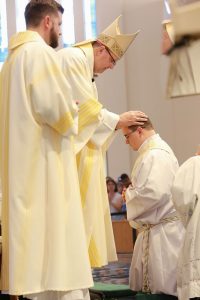 One of the key moments in the Ordination Mass was when the bishop placed his hands upon the head of the ones to be ordained, praying in silence for the gift of the Holy Spirit. 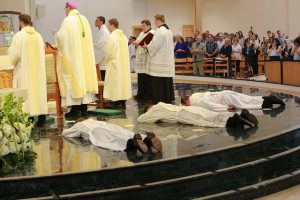 Another moving moment during the liturgy was when the men to be ordained lay prostrate in front of the altar as the congregation prayed the Litany of the Saints. This act of humility symbolizes their unworthiness for the priesthood and their dependence upon God and the prayers of the Christian community.

The Bishop also anointed the hands of the ordinands with sacred chrism. This anointing signifies that the hands of the newly ordained priest are being prepared for the sacred duties and vessels which will be part of the priestly ministry, for example, offering the bread and the wine, anointing the sick and blessing people.

“It is with these consecrated hands that you will celebrate the holy sacrifice of the Mass, thus providing the Lord’s very own body, blood, soul and divinity to his people for nourishment,” Bishop Parkes told the three men about to be ordained during his homily. 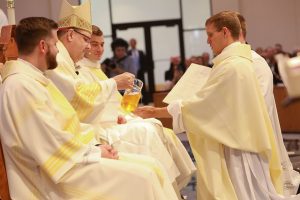 Photos above by Mike Donovan

Learn About our New Priests: 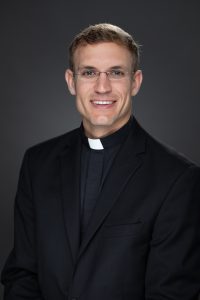 Father Anthony Astrab
Age: 32
Childhood: He was born in Dunedin and raised in Palm Harbor and Tarpon Springs.
Education: He is a 2004 graduate of Jesuit High School, Tampa. He graduated from USF with a Bachelor of Science in Accounting (2008) and a Master of Science in Entrepreneurship in Applied Technologies (2010).  He earned a Bachelor of Arts in Philosophy at St. John Vianney College Seminary, in Miami and a Master of Divinity from St. Vincent De Paul Regional Seminary, in Boynton Beach.
Vocations Story: After graduating from USF, he was making good money buying, renovating and selling homes, and he found who he thought would be his future wife. However, there was a restlessness and a certain sense of incompleteness until he entered the seminary. “I just discovered this joy that I had in the Church and I began to also fall in love with what the priest does,” said Father Astrab.
First Assignment: His first priestly assignment will be as Parochial Vicar of Nativity Parish, in Brandon. 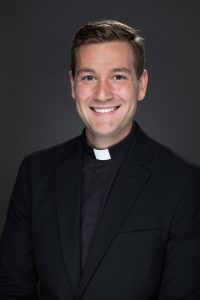 Father Ralph D’Elia
Age: 29
Childhood: He is a fourth-generation Tampa native.
Education: He graduated from USF with a bachelor’s degree in Political Science. He has been in formation six years, four years in seminary at the Pontifical North American College, in Rome and two years at St. John Vianney College Seminary, in Miami.
Vocations Story: He first sensed a calling to the priesthood while in high school. However, he put that aside and decided to study law and politics. Contrary to what he anticipated, the more he immersed himself in realizing his own plans the more he recognized that those plans were incapable of fulfilling his deepest desires. “My vocation has been defined by a desire to be fulfilled. After these six years of formation, I am the most fulfilled I have ever been in my life,” said Deacon D’Elia.
First Assignment: Following his ordination, he will continue his studies in Rome and return to the Diocese of St. Petersburg in 2020 for his first priestly assignment. 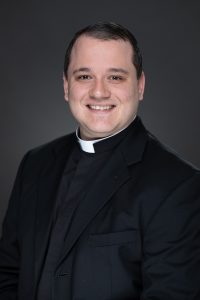 Father Joshua Hare
Age: 27
Childhood: He was born in Florida and raised in Memphis, Tennessee. For the past ten years, he has lived in Brooksville.
Education: He earned his Bachelor of Arts in philosophy at St. John Vianney College Seminary in Miami and a Master of Divinity from St. Vincent De Paul Regional Seminary in Boynton Beach.
Vocations Story: One reason that he feels called to the priesthood is because he wants to bring the joy and love of Christ to his brothers and sisters through the Eucharist. “It was the Church that has been there for me the most in my life and I want to be there for others as a priest,” said Father Hare.
First Assignment: His first priestly assignment will be as Parochial Vicar of St. Paul Parish, in St. Petersburg.

This video captures one of the most joyous moments of the ordination. Also, Bishop Parkes delivers his homily and share personal insights on the life of these new priests and words of wisdom to inspire them in their priesthood. (Video duration is 15 minutes.)