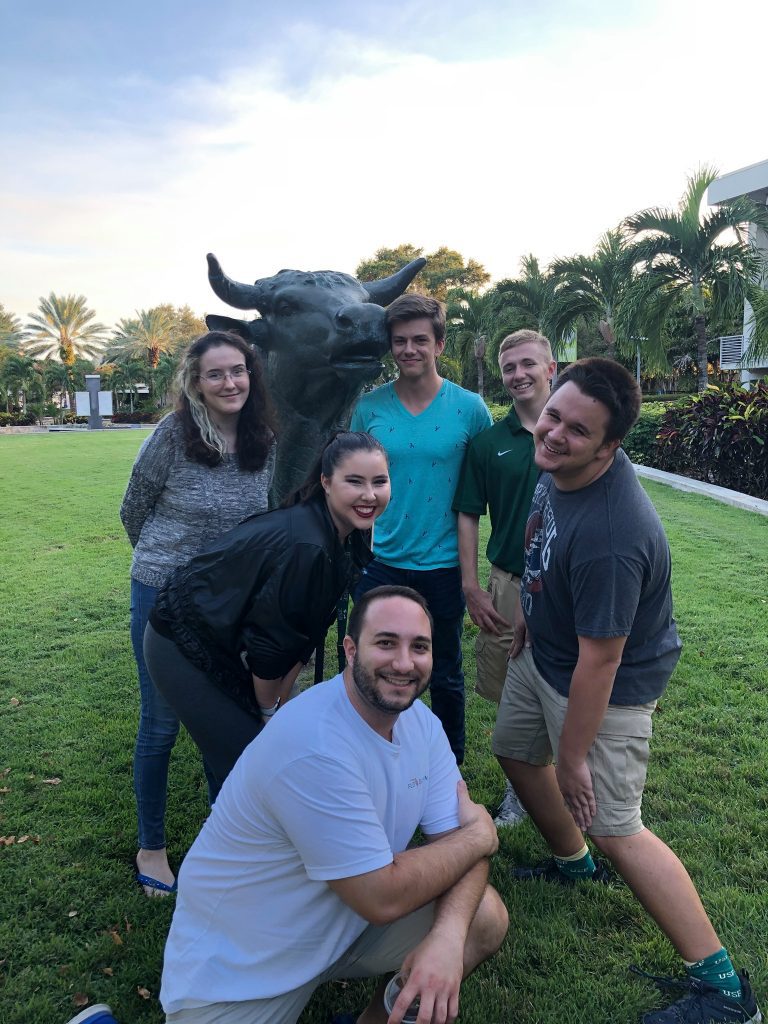 College Freshman Eric Bright has only been Catholic about a month but he’s already showing others what it means to have courageous faith.

He is currently serving as president of the newly established Catholic Bulls Club at USF’s St. Pete Campus. USF in Tampa has had a Catholic Campus Ministry for over 50 years and now the St. Pete Campus has a Catholic presence as well.

“One of the things I hope to establish is getting a solid faith community on campus, creating a network of Catholics who know each other, support each other and can do things in the community for other people and show St. Petersburg what it’s like to be a Catholic,” said Bright who was confirmed and received into the Catholic faith at Saint Mary Our Lady of Grace in St. Petersburg.

There is strength in numbers and Catholics on campus can benefit from having a shared experience of faith and fellowship, according to Bright.

“It’s a lot easier to act on and speak on your beliefs when you know there are people around you who feel the same. A lot of Catholics feel a little outnumbered on campus,” said Bright.

The student organization, which is still trying to grow, was founded in the Fall of 2019 by Father John Blum and Father Justin Freeman of St. John Vianney Parish in St. Pete Beach with help from Nicole Stowell, a USF St. Pete business law professor, who is serving as the group’s Faculty Advisor. Stowell is a parishioner of St. John Vianney Parish and her children attend the parochial school there.

Forming a club at USF in St. Pete required researching the requirements to start a student club, drafting a constitution and learning the rules and procedures for reserving rooms and publicizing events. According to Nicole, it’s been a great experience to witness this historic moment first-hand.

“They can come together as a group and talk about different issues they are facing with school and their personal life. It’s a great opportunity for them to bond together,” said Stowell. “It’s been a lot of fun watching them grow over the past few months.”

Father John Blum, who oversees the Southern Deanery of the Diocese of St. Petersburg, is leading this outreach to young adults on campus.

“We want to meet young people where they’re at, have a presence and build relationships so they can know they are part of our diocesan family and there is a place for them in the Church and get them more involved in the life of our parishes in the area,” said Father Blum.

The goal to establish a new campus ministry at USF St. Pete is the Catholic Impact Initiative chosen by the ten Catholic churches in Southern Pinellas County, also known as the Southern Deanery. Bishop Gregory Parkes asked each of the Diocese’s nine deaneries to launch a Catholic Impact Initiative that addresses one local community issue and mobilizes cross-parish creativity to establish desired outcomes.

The new Campus Ministry at USF St. Pete also ties into the goal outlined in Courageously Living the Gospel to create new Catholic student communities for all local colleges and universities in the Diocese by Easter of 2021.

The Catholic Bulls at USF St. Pete celebrated their first Mass on campus on November 19, 2019. They are making plans for their next Mass and that will be announced soon.

If you would like to join Catholic Bulls at USF St. Pete or would like to support this group, reach out to St. John Vianney Parish or visit their Facebook page: @USFSPCatholicBulls