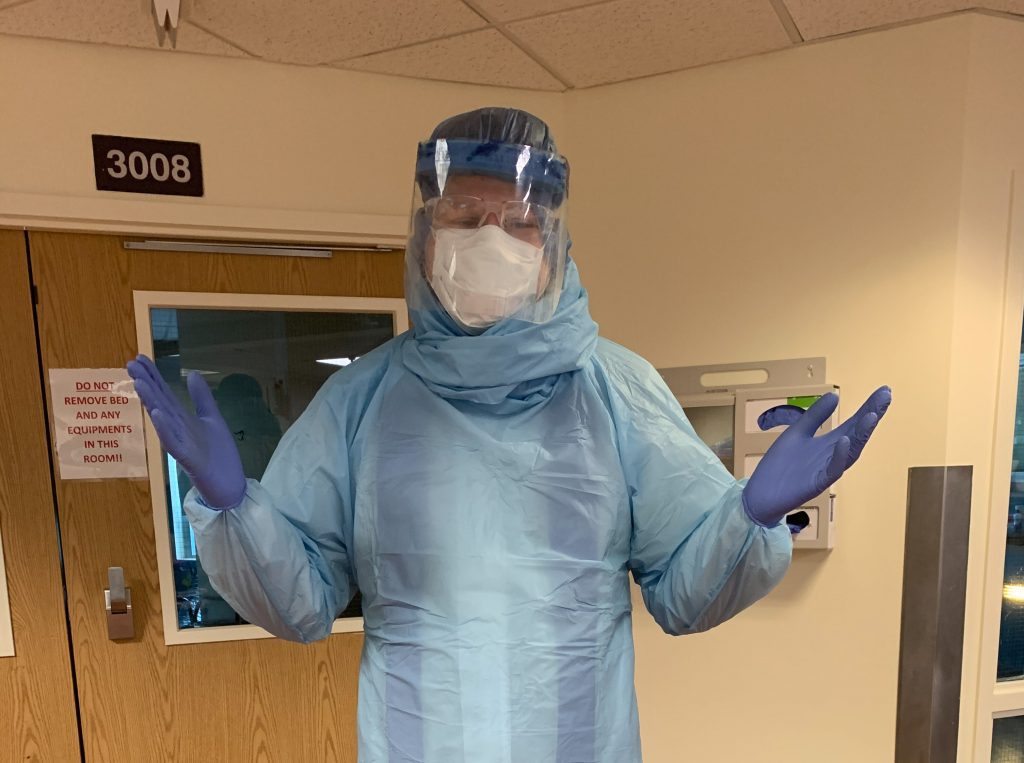 (Photo above shows Father Mike Smith of Corpus Christi Parish in the protective gear that priests wear when ministering to the ill during COVID-19.)

Being admitted to the hospital for an illness, surgery or procedure can be traumatic, especially during a pandemic when loved ones are prevented or restricted from visiting hospitals and recovery centers.  Priests who serve in medical facilities have also faced restrictions, but they have continued their essential role in sharing the mercy and healing love of Christ with those in need.

Father Mike Smith, pastor of Corpus Christi Parish in Temple Terrace, has been on the front lines praying with the ill and anointing patients suffering with COVID-19 and other health issues.

“It’s really a grace to be with the patients, especially during the last moments of their life. Many times, they get better and sometimes they pass away right away, but it’s always a grace-filled moment to be with the family during that time,” said Father Smith.

According to the Catechism of the Catholic Church, through the Anointing of the Sick and the prayer of the priests, “the whole Church commends those who are ill to the suffering and glorified Lord, that he may raise them up and save them” (#1499)

During the early months of the pandemic, some hospitals would not permit clergy to enter.

“In the beginning they wanted us to use Zoom calls or virtual calls for ministering to the patients,” said Father Smith, “which is very difficult for us because as the Catholic Church, we are very much a sacramental Church and most of our sacraments come through some kind of feeling, like taste, touch, smell, hearing and seeing.”

However, restrictive policies are changing because of action taken by the U.S. Department of Health and Human Services (read story here.)

Father Smith added: “I was really glad to see the action of the U.S. Department of Health and Human Services’ Office for Civil Rights to ensure spiritual care for patients during the COVID pandemic. Hospitals have realized how important it is to the patients and families that priests be allowed in to administer the sacraments to the patients.”

All visiting clergy must wear appropriate medical protection gear and can only use cotton balls with small amounts of oil to anoint the sick.  The used cotton balls with the blessed oils and medical cloths are later burned by the facility.

Throughout the pandemic, permanent chaplains like Father Frank Malloy have had access to provide spiritual support to patients.

Chaplain Malloy is a retired U.S. Air Force lieutenant colonel, who has served as a chaplain at Bay Pines Veterans Hospital in St. Petersburg for almost 10 years.

“The hospital was only allowing chaplains to anoint when called.  Most of the time we communicated with them from outside the door of the room via a cellphone,” said Chaplain Malloy, who ministers to veterans in the Community Living Center, a specialized nursing facility designed to care for patients who require rehabilitation and restorative care.

For the elderly and those in rehab, the sacraments and spiritual support they receive are a lifeline of hope.

“Since the residents are not allowed to join the regular community as they were prior to March, I have taken to bringing the Mass to them in their recreation room.  They also have the opportunity to have the Mass broadcast to them on television,” said Chaplain Malloy.

What can we take from this experience?  Father Smith believes that we have learned how to live with the disease and how to protect ourselves, but there are still many who are lonely and isolated.

“To totally leave the patients in isolation, I don’t think is a good policy. I think to allow visitors to come in fully protected would go a long way to improving the mental and physical well-being of the patients, especially in nursing home, but also in hospitals in general.”