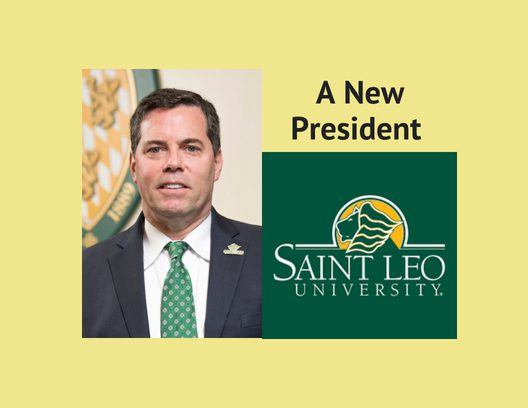 Jeffrey D. Senese was elected as president of Saint Leo University on July 26 by the Board of Trustees. Senese is the university’s 10th president. He has served as the acting president of the university since the retirement of William J. Lennox Jr. on April 30.

Previously, Senese was the university’s first provost and senior vice president of Academic and Student Affairs and provided oversight of all educational programs offered at the main campus, at its 35 education centers, and online.

“Although Jeff was named as acting president just three months ago, his leadership and forward thinking made it clear to the Board of Trustees that we could not find a better fit for our next president,” said Mary O’ Keefe, board chair. “He has spearheaded the reorganization of senior leadership, created plans for campus expansion and transformed the new strategic plan into an action plan that will lead Saint Leo University into the next stage of growth nationally and internationally.”

Prior to coming to Saint Leo University Senese served as provost and vice president of Academic Affairs at Cardinal Stritch University, one of the nation’s largest Franciscan universities, in Milwaukee, WI, with about 4,000 students overall.

“When I came to Saint Leo University as provost in January, I knew we had a great history and a two-decade tradition of cutting-edge leadership,” Senese said. “I am now more confident than ever that we stand on the edge of greatness. The faculty and staff welcome innovation, challenge the status quo and believe every year brings the opportunity to be better than before. I consider it a privilege to lead Saint Leo’s next phase of innovative and expansion.”

Saint Leo University (www.saintleo.edu) is a modern Catholic teaching university that is firmly grounded in the liberal arts tradition and the timeless Benedictine wisdom that seeks balanced growth of mind, body, and spirit. The Saint Leo University of today is a private, nonprofit institution that creates hospitable learning communities wherever students want to be or need to be, whether that is a campus classroom, a web-based environment, an employer’s worksite, a military base, or an office park. Saint Leo welcomes people of all faiths and of no religious affiliation and encourages learners of all generations. The university is committed to providing educational opportunities to the nation’s armed forces, veterans, and their families. Saint Leo is regionally accredited to award degrees ranging from the associate to the doctorate, and the faculty and staff guide all students to develop their capacities for critical thinking, moral reflection, and lifelong learning and leadership.

The university remains the faithful steward of the beautiful lakeside University Campus in the Tampa Bay region of Florida, where its founding monks created the first Catholic college in the state in 1889. Serving more than 13,000 students, Saint Leo has expanded to downtown Tampa, to other sites in Florida and beyond, and maintains a physical presence in seven states. The university provides highly respected online learning programs to students nationally and internationally. More than 94,000 alumni reside in all 50 states, in Washington, DC, in three U.S. territories, and in 76 countries.