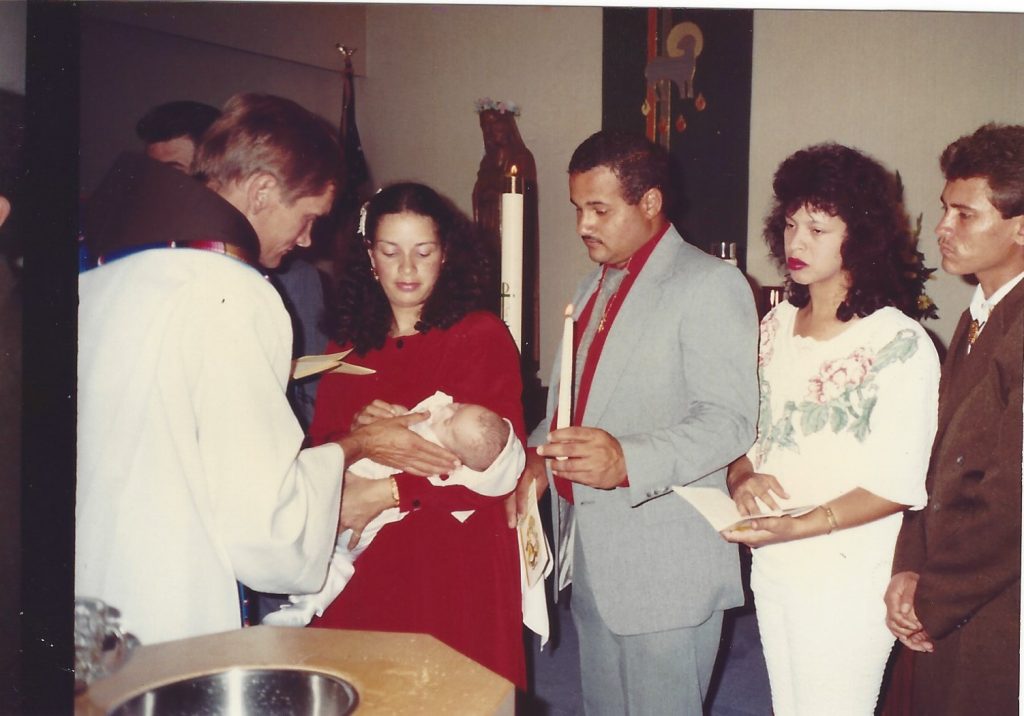 When Deacon Israel “Izzie” Hernandez is ordained on May 15, the pews at the Cathedral will be filled with his mother, father, two sisters, and family from Puerto Rico, with even more across the country able to watch via livestream. Their support and prayers have meant so much to Deacon Izzie during the past seven years of formation and discernment. But the journey to this day has not always been an easy one for the Hernandez family. His announcement that he was going to seminary came just one day after his graduation from the University of South Florida and his family was shocked to say the least.

“I was sitting watching TV with my oldest daughter and my husband and he just came out of his room and blurted out, ‘By the way, I’m going to the seminary in June.’” recalled his mother, Daisy Hernandez.

Deacon Izzie had already confided in his middle sister, Meredith, who remembers coming home after the bombshell was dropped. “My sister was stuck in her room crying her eyes out and my dad was not saying a peep! It was a journey, wrapping our heads around what was going on.”

The family’s reaction is understandable, given that Deacon Izzie himself had never considered the priesthood until six months prior to his college graduation. While it was important to him to be involved with his faith and his parish, he had every intention of starting a career with his new Business Marketing Degree, perhaps with his uncle’s carpet cleaning business where he had worked during college. But when two close friends decided to enter seminary, Deacon Izzie began to feel a pull that he couldn’t ignore.

“I thought, these guys are taking that big step and I’ve never even thought about it! Maybe this is something I should bring to the Lord and ponder,” he said. “I talked to some priests and to the guys who were entering and the rest is history!”

It wasn’t all smooth sailing from this point however. Deacon Izzie occasionally struggled with doubts but was encouraged in prayer to just give it a year at a time. His formators at the seminary challenged him to grow – in ways that he didn’t expect. His pastoral year was spent in lockdown, figuring out new ways to minister during a pandemic. He found the fraternity of his brother seminarians to be especially helpful as they brought fears and struggles to each other, praying together and encouraging one another on their journey.

“Throughout my seminary life I started to learn how to listen more and not always be the person talking, wanting to be the center of the conversation. That was a huge challenge for me but I think I’ve grown a lot in that area,” said Deacon Izzie. “My brothers point that out all the time, which is affirming for me because it helps me to see that I’ve grown in this area that I’ve been challenged in. I have such appreciation for all who have been with me on this journey.”

Meanwhile, his family has been on a journey of their own. Deacon Izzie’s father, Israel, and his eldest sister Judyvette initially had the hardest time accepting his decision, worried about the distance it would place between them. But the shock and concern has given way to excitement as they’ve witnessed the joy of his vocation. Here again, the community of the seminary had a role to play as parents’ weekends and seminarian family dinners with the Bishop gave them reassurance about Deacon Izzie’s well-being and happiness.

“Anytime there were family weekends at the seminary we were all there,” said Daisy. “I had no clue what went on there! I saw these young men and they were all very nice and spoke with us. We had a good time.”

“As it’s progressed, I see the man he’s grown up to be. We have seen a change in him. It’s very humbling. I see a lot of joy in him,” said Meredith, adding, “I can’t wait to see how he moves in other people’s lives.”

Deacon Izzie says he is “excited to get out there and serve the people of God.” But his priesthood has already had a profound impact on those closest to him. His yes to God’s call has also led his family to a deeper faith as they pray, trust, and offer to God a cherished member of their family.

“It’s one of the highlights, knowing that my family is on board has made a huge difference for my vocation,” said Deacon Izzie.

Deacon Israel “Izzie” Hernandez on May 15, 2021 at 11:00 am at the Cathedral of St. Jude the Apostle. Seating will be limited within the Cathedral, but the ordination will also be live streamed at www.dosp.org/livestream, on www.Facebook.com/diostpete  and on www.YouTube.com/dioceseofstpete.