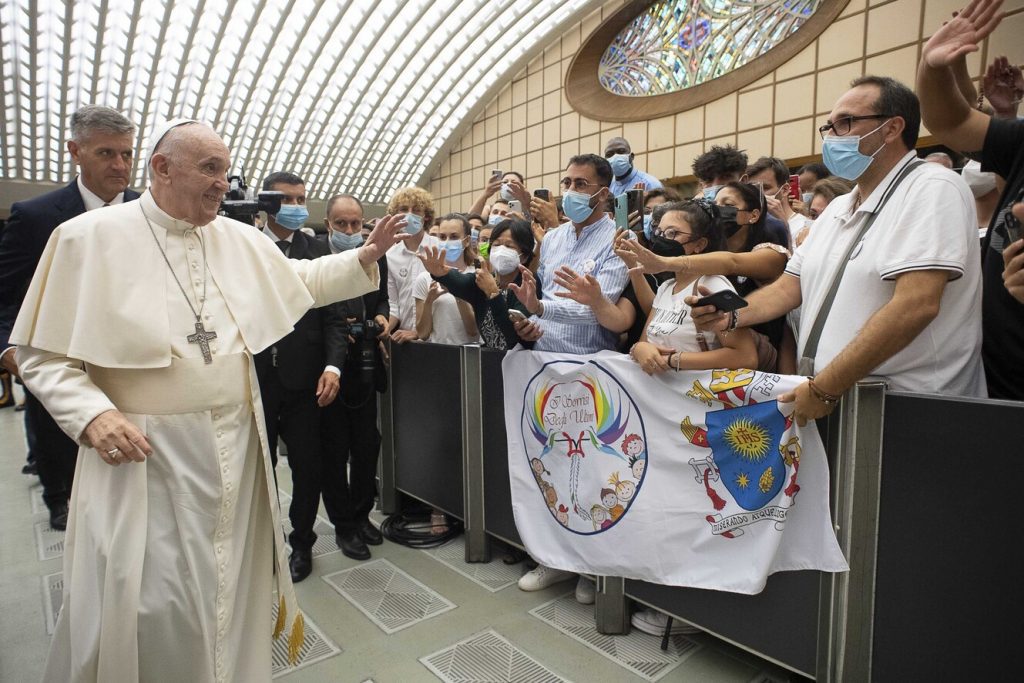 Vatican City, Aug 8, 2021| (CNA) – Pope Francis said on Sunday that Jesus’ declaration that he is the “Bread of Life” renews “our amazement for the gift of the Eucharist.”

In his Angelus address on Aug. 8, the pope reflected on the meaning of Jesus’ statement in a passage of the Gospel of John known as the Bread of Life Discourse.

“These words of the Lord reawaken in us our amazement for the gift of the Eucharist. No one in this world, as much they might love another person, can make themselves become food for them. God did so, and does so, for us,” he said.

“Let us renew this amazement. Let us do so as we adore the Bread of Life, because adoration fills life with amazement.”

In his Angelus address, the pope expounded on the day’s Gospel reading, John 6:41-51.

“Jesus reveals himself as bread, that is, the essential, what is necessary for everyday life, without him it does not work. Not one bread among many others, but the bread of life,” he commented.

“In other words, without him, rather than living, we get by: because he alone nourishes the soul; he alone forgives us from that evil that we cannot overcome on our own; he alone makes us feel loved even if everyone else disappoints us; he alone gives us the strength to love and forgive in difficulties; he alone gives that peace to the heart that it is searching for; he alone gives eternal life when life here on earth ends. He is the essential bread of life.”

Pope Francis gave his live-streamed address at a window overlooking St. Peter’s Square as he continues to recuperate from colon surgery in July. Pilgrims stood spaced out around the square, with some carrying parasols as the summer heat rose in Rome.

The pope said that Jesus’ “Bread of Life” statement summed up “his entire being and mission.”

“This will be seen completely at the end, at the Last Supper. Jesus knows that the Father is asking him not only to give food to people, but to give himself, to break himself, his own life, his own flesh, his own heart, so that we might have life,” he said.

The pope noted that in the Gospel reading, the people were not amazed, but rather scandalized, by Jesus’ declaration.

“Perhaps we too might be scandalized: it might make us more comfortable to have a God who stays in heaven without getting involved, while we can manage matters here on earth,” he said, pointing up at the sky as a breeze flapped the tapestry beneath him bearing his coat of arms.

“And He is interested in every aspect of our life. We can tell him about what we are feeling, our work, our day, our heartache, our anguish, so many things. We can tell him everything because Jesus wants this intimacy with us.”

“What does he not want? To be relegated to being considered a side dish — he who is Bread — to be overlooked and set aside, or called on only when we need him.”

Pope Francis observed that many people eat at least one meal a day with others.

“It would be lovely, before breaking bread, to invite Jesus, the Bread of Life, to ask him simply to bless what we have done and what we have failed to do,” he said.

“Let us invite him into our home; let us pray in a ‘homely’ style. Jesus will be at the table with us and we will be fed by a greater love.”

After praying the Angelus, Pope Francis greeted pilgrims in the square below, acknowledging those from various parts of Italy. He congratulated a Salesian group that had arrived in Rome by bicycle from Triveneto, in northeastern Italy. The pope concluded by wishing those present a happy Sunday.

“Please don’t forget to pray for me,” he said.