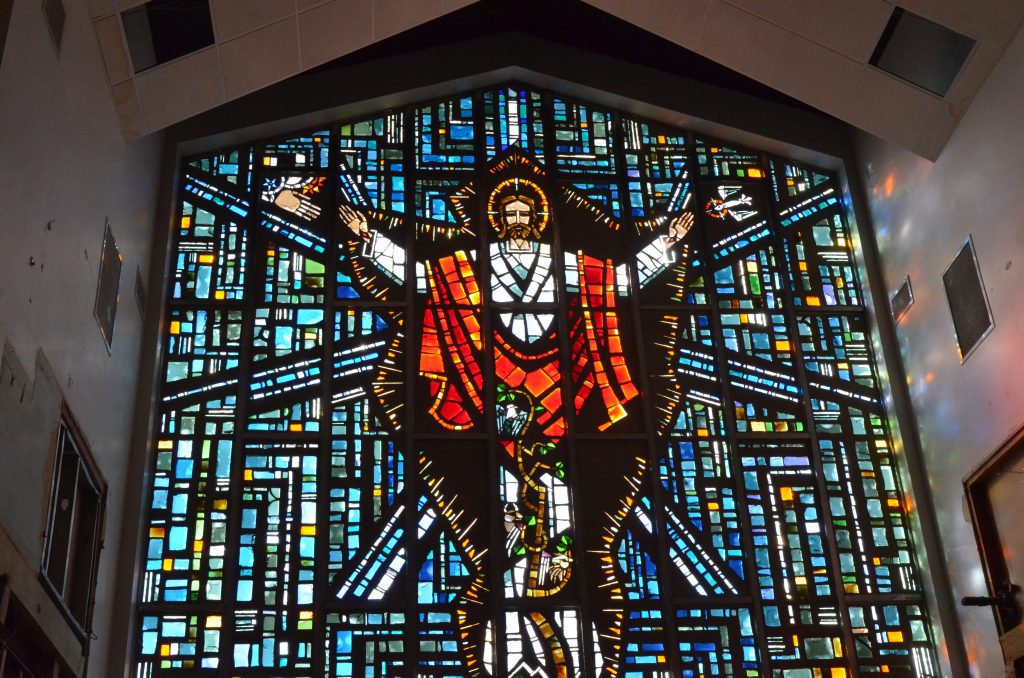 When parishioners of Most Holy Redeemer Parish in Tampa walk into the church on Easter morning, they will be celebrating the Risen Christ in more ways than one. Parishioners will see an unobstructed floor-to-ceiling stained glass window of the Risen Christ welcoming all who enter. For years this window went largely unnoticed, partially hidden by the choir loft at the back of the church. However, the vision of Father Anthony Coppola, pastor, is literally turning things around.

“We’re flipping the church around and really making it a beautiful church. I think a miracle is happening,” said Father Anthony, who noticed the window on his first day as the new pastor two-and-a-half years ago. “I went to say a prayer by the altar and when I turned around, I saw this beautiful window. I almost fell down!”

Father Anthony knew on that first day that he wanted to make the window more visible but the obstacles seemed insurmountable. The cost to tear down the choir loft was too great a financial burden. The idea never left him, however, and one day the parish received a bequest that was enough to cover the cost of the choir loft removal as well as replacing the floors and pews. Also, in order to give the window greater prominence, the orientation of the church is being flipped. The altar will be moved to the opposite side of the church and placed directly beneath the Risen Christ.

“I really believe God intended this to happen, the flipping of the church,” said Father Anthony. “What’s so interesting about the window is that it’s so rich in meaning. It’s like breaking open the Word of God. The more you break it open, the more you see that it was not meant to be hidden.”

The Catholic Church has a long history of creating stained glass windows to evangelize and teach and this window at Most Holy Redeemer is no exception. It is filled with rich symbolism and imagery that makes its new placement at the front of the church all the more striking. In addition to the central figure of Christ, the window also contains an image of the Lamb of God, recalling a scene that takes place in the Holy of Holies and more appropriately placed in the sanctuary of the church rather than the vestibule.

There are also two fish that recall the miracle of the multiplication of the loaves, especially when seen behind the Bread of Life on the altar. The tabernacle will be placed under an image of an Easter lily, symbolizing that Christ brings new life. To the left of the tabernacle is the empty cross, inviting the congregation to reflect on their own mortality and to remember that their final glory will be in Heaven.

The window isn’t the only thing that has been uncovered. In the course of the renovation, construction workers found a bulletin hidden behind a wall that was dated January 21, 1962 – the date of the parish’s dedication by Archbishop Joseph Hurley. Now, nearly 60 years since the church was built and 45 years since the stained glass window was added and hidden by the choir loft, a new generation will enter a “new” Most Holy Redeemer where the beauty of the Risen Christ window will serve as a poignant reminder that Jesus brings new life.

“Most of our parishioners have come into the church to take a look at what is going on,” said Father Anthony. “They all have a tear in their eye when they see the window. They can’t believe how beautiful it is.”